Regulators of Opioid Sensitivity and Tolerance

Opioids exert their pain-relieving effects by activating the μ‐opioid receptor (MOR), a G protein‐coupled receptor (GPCR) that is expressed in the nervous system. MOR activation also produces problematic side effects such as opioid dependence, tolerance to repeated drug use, and withdrawal from chronic opioid exposure. Dr. Grill has developed a platform to identify genes that regulate MOR signaling, sensitivity and tolerance. The ultimate aim is identifying novel molecular targets that could be drugged to treat opioid addiction and withdrawal, and provide alternative pain management strategies. 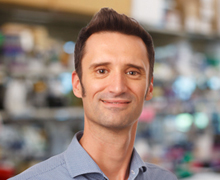 The platform the Grill lab developed was to engineer opioid-induced behaviors into a common genetic model, the nematode Caenorhabditis elegans. Mammalian MOR was expressed in the C. elegans nervous system, imbuing transgenic MOR (tgMOR) animals with behavioral sensitivity to opioid drugs. As a result, tgMOR worms are sensitive to morphine and fentanyl, which temporarily paralyzes them. The response is dose-dependent and blocked by naloxone, a MOR antagonist used to reduce or reverse opioid overdose. Additional experiments confirmed that tgMOR worms use conserved GPCR signaling machinery.

In an entirely new approach to studying opioid drugs, the Grill team used the tgMOR C. elegans platform for an unbiased, large-scale forward genetic screen to find molecules that modify MOR signaling and could be new targets for MOR-based therapeutics. Whole genome sequencing, CRISPR/Cas9 gene editing, and transgenic rescue identified several negative modulators of MOR signaling, including an orphan GPCR with a mammalian ortholog, GPR139. Further work on GPR139 in vitro with human cells and in vivo with mice show it is a central to an ‘anti‐opioid’ system in the brain. As a GPCR, GPR139 is potentially highly druggable. Preliminary work shows that a small molecule that binds GPR139 alters morphine sensitivity, addiction-related behavior, and withdrawal in mice. This further supports the validity and powerful potential of the tgMOR C. elegans platform as a resource for opioid-related target discovery and as a possible general GPCR screening technology.

In addition, the Grill lab has extensive experience using in vivo proteomics to identify components of pathways in nervous system development and maintenance. Grill and his colleagues envision deploying this unique tgMOR opioid behavioral platform with proteomics to determine how novel players in MOR signaling act.

Dr. Grill has experience working with small biotech startups. He is interested in collaborations that use his C. elegans system and his group’s expertise in engineered genetics and in vivo proteomics for therapeutic discovery and development.