Identifying targets to modify B cell activation during autoimmunity 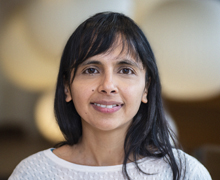 Exposing B cells to antigen activates them to expand, proliferate, and produce antibodies against the antigen. Autoimmune diseases result from immune system dysfunction that includes B cells that direct their responses against self antigens.

Dr. Mridu Acharya and collaborators discovered that integrins, which are transmembrane proteins with structural and cell-signaling functions, are involved in B cell activation. Specifically, integrins influence toll-like receptor (TLR) signaling that promotes B cell maturation, proliferation, and antibody production. Because TLR signaling in B cells is linked to production of self-directed antibodies in mouse models of systemic lupus erythematosus (SLE), it is believed that targeting B cell integrins may be relevant to human autoimmune disease.

In vivo evidence from Dr. Acharya’s work supports the connections among integrins, TLR signaling, and autoimmunity. Dr. Acharya’s group found that deleting the av integrin from B cells in a mouse model makes B cells hyperresponsive, so they produce more antibodies. As the integrin-knockout mice age, they develop signs of autoimmunity, such as production of self-directed antibodies against double-stranded DNA. In addition, the mechanism by which integrin knockout leads to B cell hyperresponsiveness indicates involvement of the autophagy pathway in human autoimmune disease.

The autophagy pathway includes a family of proteins that are involved in regulating intracellular trafficking events. Polymorphisms in the human autophagy genes such Atg5 and Atg7 are linked to SLE. Dr. Acharya’s investigation of TLR trafficking in B cells lacking av integrin showed that integrin and the autophagy pathway components Atg5 and LC3 coordinate TLR trafficking. Normally, integrin, Atg5, and LC3 work together to reduce the B cell response to TLR signals. Therefore, a deficiency in integrin, Atg5, or LC3 boosts B cell proliferation and antibody production.

These results from the Acharya group uncover multiple new pathways with therapeutic targets for SLE. For example, small molecule drugs or other therapies that are integrin agonists might limit destructive, self-directed B cell responses in SLE or other autoimmunities.

Dr. Acharya is currently screening small molecules that modulate integrin function. The applications of these candidate compounds include boosting B cell responses to improve vaccines and reducing inappropriate, self-directed B cell responses in autoimmunity. Dr. Acharya is interested in partnerships to further this drug discovery and development work. She also has expertise in B cell editing through collaborations with Drs. Richard James and David Rawlings.