Genetic epilepsies in childhood constitute a complex group of disorders, with diverse etiologies, and clinicopathologic features. Advances in genetic technology have revealed that a large portion of these disorders arise from mutations in genes that are critical for multiple neuronal functions.

Dravet syndrome, a severe, life-threatening form of epilepsy that starts in infancy and has an array of comorbidities, is caused by mutations in SCN1A, a gene for a sodium channel that is involved in the generation and propagation of electrical impulses in neurons. Leigh syndrome, a metabolic disorder due to mitochondrial dysfunction that presents with severe seizures, can result from mutations in either the nuclear or mitochondrial genomes. Leigh syndrome is usually fatal within the first 10 years of life. Brain malformations, including focal cortical dysplasia and megalencephaly, constitute the most frequent causes of epilepsy in children. They have been recently linked to mutations in genes such as PIK3CA that are involved in brain development. 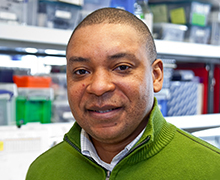 In collaboration with colleagues at the University of Washington, Dr. Franck Kalume developed mice with knockouts of SCN1A to define the neurons and networks of Dravet syndrome. His group determined that GABAergic interneuron dysfunction is primarily responsible for the presentations of the disease. They used the specialized mouse model, in which seizures can be reliably induced by increasing body temperature, to uncover the cellular and network mechanisms of specific symptoms such as sleep disorders and seizures. Dr. Kalume is using this deep understanding of the pathophysiology of Dravet syndrome to develop medical devices, drug treatments, and therapies for this pediatric orphan disease.

For epilepsy related to Leigh syndrome, Dr. Kalume collaborates with Dr. Simon Johnson, who uses Ndufs4 knockout mice as a model for the disease. Dr. Kalume’s group developed a mouse model in which Ndufs4 is knocked out in only GABAergic interneurons. This model isolates the epilepsy component of Leigh syndrome from other aspects of the disease. The Kalume lab is using the specialized Ndufs4 mice to work specifically on epilepsy in Leigh syndrome, including understanding its underpinning cellular mechanisms and identifying potential therapeutic targets.

Dr. Kalume also collaborates with Dr. Kathleen Millen, who uses CRISPR and other gene-editing methods to develop mouse models for brain overgrowth and other malformations. Drs. Kalume and Millen work with a specialized mouse model to study mammalian targets of rapamycin (mTOR)-related epilepsy. In addition, the Kalume group works with Drs. Filomena Pirozzi and Ghayda Mirzaa on brain organoid models of epilepsy. These studies are using electroencephalographic (EEG) technology to monitor the organoids while testing novel drug for these disorders.

Dr. Kalume is interested in partnerships to further develop medical device prototypes and discover and test candidate therapies for epilepsy including drugs and gene therapy. He is also interested in using advanced models of pediatric epilepsy to identify additional therapeutic targets.