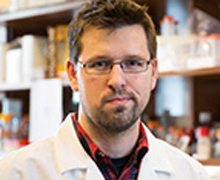 Examples of models used by the Johnson group include Ndufs4 knockout mice, which are the premier model for studying development and treatment of Leigh syndrome. Dr. Johnson used these mice to show that rapamycin, a drug used as an immunosuppressant and a cancer therapy, has therapeutic effects in the Ndufs4 mice. Dr. Johnson also works with the harlequin mouse model, which carries a defect in Aifm1, a mitochondria-associated apoptosis factor. Through collaborative work, the lab is involved in state-of-the-art methods for developing and working with knock-in mice that carry mutations found in patients with mitochondrial diseases.

Examples of mechanistic investigations by the Johnson group include studying how inhibition of mTOR, a key cellular nutrient sensing factor and low oxygen (hypoxia) alleviate disease in mouse models of mitochondrial syndromes. The Johnson lab is also examining how a ketogenic diet reduces seizures in children with mitochondrial diseases. Identifying the precise mechanisms and pathways of these interventions will identify new druggable targets and indicate if existing pharmacological agents in metabolism and hypoxia sensing and response could be effective for mitochondrial disorders.

The Johnson group has experience using animal models to screen small compounds for therapeutic effects. For example, using Ndufs4 mice, they developed a catalog of agents that target a specific pathway of neural inflammation initiated by the Csf1 receptor. Other components of this pathway include substrates of phosphoinositide 3-kinases (PI3Ks), including targets of existing PI3K inhibitors. The Johnson lab is testing these agents in other models of neural inflammation for their potential to treat mitochondrial diseases.