Biomarkers for Diagnosing Infantile Hemangiomas and Other Vascular Malformations

Endothelial and circulating C19MC microRNAs as biomarkers of infantile hemangioma 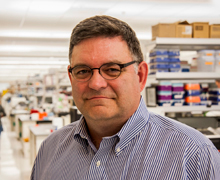 Dr. Jonathan PerkinsDr. Perkins is focused on surgical and medical therapies for vascular malformations, which are congenital anomalies involving veins, arteries, or the lymphatic system. Of particular interest are infantile hemangiomas (IHs), benign vascular tumors that develop rapidly in infants. IHs often resolve on their own over time but they may potentially block airways, become disfiguring, or impair chewing, eating or speak­ing, as well as interfere with quality of life. Therefore, resolving IHs with the least invasive treatment possible is a priority. Also of interest are other head and neck vascular malformations that can involve tumors, bleeding, or swelling in the mouth, tongue, face or neck.

In recent years, Perkins has pioneered propranolol treatment to reduce or prevent the growth of IH tumors without the risk of surgery. Propranolol is a β-adrenergic receptor antagonist, known for the treatment of high blood pressure and other cardiac diseases. However, because some IHs do not respond to propran­olol, there is a need to improve diagnostic specificity and treatment.

Perkins and his team have identified a microRNA biomarker for diagnosis of IH. By analyzing the microRNA profile of IH patient samples as compared to other vascular malformations and normal skin tissue, C19MC was identified as a microRNA cluster only over-expressed in IH endothelial cells. Since microRNAs are also re­leased from their cells of origin into circulation, C19MC microRNA is detectable in plasma of IH patients. Perkins’ team has demonstrated that C19MC microRNA is present in plasma of IH patients before treatment with propranolol and is lowered or undetectable after successful treatment.

The development of a diagnostic biomarker for IH is important because diagnosis of a vascular malformation can be difficult. The presence of C19MC microRNA can help confirm an IH diagnosis without the need for a biopsy. Furthermore, this biomarker might be used in the future to help determine the optimal dosage of propranolol, guide treatment, measure responses, and improve patient outcomes.