Inflammatory bowel disease (IBD) is an immune dysregulation triggered by the fecal microbiome. Patients suffer from diarrhea, blood in stool and abdominal pain, as well as nutritional and growth defects. IBD, along with other immune dysregulations such as multiple sclerosis, diabetes mellitus and juvenile idiopathic arthritis, is a disease of the 20th century, with notable increase in incidence in the last half century. Current therapies have focused on suppressing the immune system. These immunosuppressive therapies are not effective for all patients and carry significant side effects and costs. The goal of Dr. David Suskind’s work is to establish therapies for inflammatory bowel disease through manipulation of the fecal microbiome. 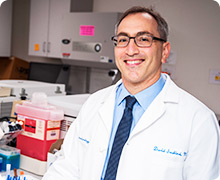 Changing the fecal microbiome through dietary therapy is a major focus of Suskind’s lab. An initial study on the Specific Carbohydrate Diet (SCD) in IBD revealed that diet not only resolved patients’ clinical symptoms but also decreased the inflammation associated with their disease. His research has led to the first prospective study of SCD in IBD examining the effect of diet on clinical and laboratory disease activity, as well as assessing the diet’s effect on the fecal microbiome and its associated metabolomics. Suskind’s current study is examining three different anti-inflammatory diets in a double-blind diet-controlled trial in patients with Crohn’s disease. His hope is to better define the optimal diet for patients with IBD. In addition to Suskind’s research in diet and nutrition, he currently has an active clinical practice in pediatric IBD with an active nutrition program. Seattle Children’s Pediatric IBD Center currently follows over 800 children with Crohn’s or ulcerative colitis.