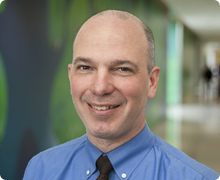 Dr. Jeffrey OjemannAs the Division Chief of Neurosurgery and Director of Epilepsy Surgery at Seattle Children’s, Dr. Jeffrey Ojemann conducts research on improving surgical techniques for epilepsy and other neurological diseases. One of the current surgical treatments for epilepsy uses internal brain implants to monitor brain signals and deliver stimulation to prevent abnormal signals. Dr. Ojemann recruits patients who are undergoing this treatment for epilepsy to participate in studies designed to determine if these types of electrode implants can also be used to monitor and stimulate the brain in different disease contexts.

Dr. Ojemann has used the signals recorded from brain implants to control a brain/machine interface, such as an external robotic arm or hand. Prosthetics that interact with the brain directly have the potential to greatly improve the lives of patients with paralysis resulting from spinal cord injuries, stroke, or neurodegenerative diseases. Additionally, Dr. Ojemann’s research also has the potential to impact the treatment of Parkinson’s disease and other movement disorders. Deep Brain Stimulation of the thalamus is currently used as a treatment for the movement disorders of Parkinson’s. Brain signal recordings allow for targeted application and timing of this therapy. For example, allowing the application of the therapeutic stimulation only when the patient is using the affected limb can extend the life of batteries and reduce the number of surgeries required to replace them. The stimulation is triggered based on direct recording from the brain surface of the signals associated with the initiation of movement. Finally, stimulation of both the brain and spinal cord can be used to enhance signals between these two areas to assist in the recovery of motor function in a variety of neurological disorders.

Dr. Ojemann would be interested in collaborating with industry partners on projects that are related to expanding the use of brain implants for a wide range of neurological diseases, including stroke, spinal cord injury, neurodegenerative disorders, cerebral palsy, or spina bifida.