What is hypoplastic left heart syndrome?

Hypoplastic left heart syndrome (HLHS) is when the left side of the heart is not fully developed. It is a rare and serious birth defect.

A healthy heart works this way:

In a child with HLHS:

Several other heart conditions are called hypoplastic left heart syndrome variants. They cause similar problems and have similar treatment plans. 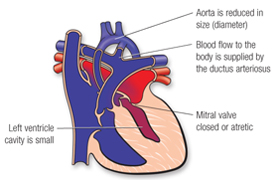 Our heart team has treated many children with HLHS. We have years of experience with the medical and surgical treatment these patients require. Children with HLHS receive compassionate, comprehensive care through our Single Ventricle Program.

Most babies with HLHS develop symptoms within the first days after birth if not properly treated.

Babies with HLHS need surgery in the first weeks of life. They will have a series of surgeries to redirect blood flow through their heart.

Before surgery, your baby will need medicine (prostaglandin) that keeps the ductus arteriosus (the blood vessel between the pulmonary artery and aorta) open so blood can get to the rest of the body. Your baby may need help breathing or need to be on a breathing machine (ventilator).

HLHS is called a “single ventricle heart defect” because there is only 1 pumping chamber in the heart. Single ventricle defects are some of the most complex heart birth defects.

We provide comprehensive care for children with HLHS through our Single Ventricle Program.

Outcomes for children with HLHS have improved dramatically in the past several decades. However, the period between the first and second surgeries is a particularly vulnerable time for these infants. Children will be cared for through our Single Ventricle Program, which focuses on the care and monitoring of infants with these severe heart problems.

Seattle Children’s is part of a nationwide group of children’s hospitals called the National Pediatric Cardiology Quality Improvement Collaborative (NPC-QIC) dedicated to improving the outcomes and quality of life for children with HLHS. The NPC-QIC provides additional family resources, support and information.

To meet your child’s long-term healthcare needs, we have a special Adult Congenital Heart Disease Program to transition your child to adult care when they are ready.

Contact the Heart Center at 206-987-2515 to request an appointment, a second opinion or more information.