Pulmonary and Sleep Medicine has a diverse slate of research studies being conducted including collaborations with investigators throughout Seattle Children’s.

Below are some great examples of the work the department has been doing over the last year.

Bronchopulmonary dysplasia (BPD) is an important and common cause of chronic lung disease in premature infants, yet there are limited evidence-based therapeutics to alter the disease course. Moreover, BPD pathogenesis is poorly understood, but life-saving oxygen exposure, in combination with additional “hits” to the lung such as infection and mechanical stretch from chronic mechanical ventilation, leads to inflammation and lung injury. Laurie Eldredge is examining the role of macrophage polarization in lung injury and repair in a mouse model of BPD. This is her Clinical Research Scholars Program project. As some 50–70% of the most premature infants will develop BPD, this research could help improve care for more than 10,000 infants a year in the U.S.

Christopher Goss and Sonya Heltshe are PIs for a large-scale multinational clinical trial assessing different durations of treatment with intravenous antibiotics for pulmonary exacerbations in patients with CF.

The Standardization of Pulmonary Exacerbation Treatment in CF (STOP) study is an effort to systematically research different features of exacerbation treatment to optimize care. Of 220 adolescent and adult patients enrolled, 56% were female, 19% were adolescents, and 71% were infected with P. aeruginosa. The mean (SD) FEV1 at enrollment was 51.1 (21.6)% predicted. Most patients (85%) experienced symptoms for ≥7 days before admission, 43% had received IV antibiotics within the previous 6 months, and 48% received oral and/or inhaled antibiotics prior to IV antibiotic initiation. Some 40% had ≥10% FEV1 decrease from their best value recorded in the previous 6 months, but for 20% of patients, their enrollment FEV1 was their best FEV1 recorded within the previous 6 months. Physicians reported that their primary treatment objectives were lung function recovery (53%) and improvement of symptoms (47%) of PEz, and that they would enroll patients in studies involving 10-day (72%) or 14-day (87%), but not 7-day (29%) treatment regimens.

This information is being used for the STOP-2 study – a randomized controlled clinical trial of different IV antibiotic treatment durations for PEx where patients are assessed for lung function and symptom improvement after 7-10 days of treatment. The study is approximately 30% enrolled with more than 300 participants randomized since July 2016 at over 50 sites in the CF Foundation Therapeutics Development Network and Canada.

Greg Redding: Focusing on Respiratory Muscle Strength in Children with Early Onset Scoliosis, in Collaboration with Orthopedics and Sports Medicine

Division chief Greg Redding has variety of research interests, but over the past decade has focused on an ongoing collaboration with Seattle Children’s Orthopedics and Sports Medicine.

It is known that progressive restrictive respiratory disease is common among children with moderate to severe early onset scoliosis (EOS), and that reduced respiratory muscle strength is associated with the loss of lung function in adolescents and adults with scoliosis. Redding and co-authors examined inspiratory and expiratory respiratory muscle strength in 49 children with EOS but no diagnosis of underlying muscle weakness. The researchers measured maximum inspiratory pressure, maximum expiratory pressure, forced vital capacity, body mass index and Cobb angle (a measure of severity of the spine deformity). They reported that weakened respiratory muscles are common and persistent in children with moderate to severe early onset scoliosis and was correlated with reductions in vital capacity. The mechanism for this abnormal respiratory function is unclear. Future work is needed to develop surgical treatment strategies to preserve respiratory function in children with EOS as they progress through childhood. 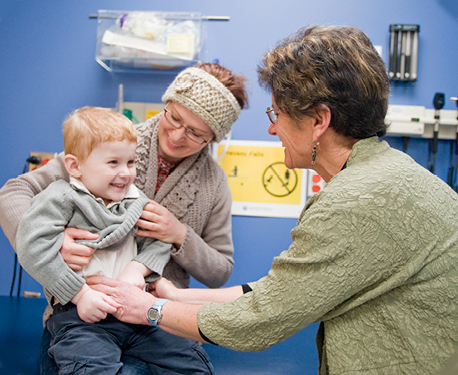 Margaret Rosenfeld (PI) and Ron Gibson (co-PI) are leading the Early Pseudomonas Infection Control (EPIC) observational multicenter study, which encompasses over 50 sites in U.S. In its 13th year now, the original goal of the study was to look at risk factors for Pseudomonas acquisition. The study has now expanded to identify genetic modifiers of outcomes in the cohort in collaboration with geneticist Michael Bamshad and University of Washington biostatistician, Mary Emond. To date, 1,700 patients have been enrolled, with a high retention rate: 1,350 of these patients are still being followed. Each year, research teams at each site follow up with patients, collect specimens and update patient information in the Cystic Fibrosis Foundation Patient Registry.

The authors analyzed a cohort of 1,375 children with CF who were <13 years of age. Maternal education was high school or less in 28.1%, 26.8% had household income <$40 000, and 43.8% had Medicaid or no insurance. Maternal smoking after birth was present in 24.8%, and more prevalent in household with low socioeconomic status (SES). Environmental tobacco smoke (ETS) exposure was disproportionately high in low SES families in this cohort. Lower SES and ETS exposure had independent adverse effects on pulmonary and nutritional outcomes. Estimated effect of SES on FEV1 decreased minimally after ETS adjustment, suggesting health disparity risks independent of ETS exposure.

Learn more about the history of treatment and cure of cystic fibrosis in the 100-Year Anniversary edition of the American Journal of Respiratory and Critical Care Medicine: Ramsey BW, Welsh MJ. AJRCCM: 100-Year Anniversary. Progress along the pathway of discovery leading to treatment and cure of cystic fibrosis. Am J Respir Crit Care Med. 2017 May 1;195(9):1092-1099.