What is Crouzon syndrome?

Crouzon syndrome is a rare genetic form of craniosynostosis — the early closing of 1 or more of the soft, fibrous seams (sutures) between the skull bones. Crouzon is pronounced kroo-ZAHN.

Because some of the bones of the skull and the face fuse early, the bones cannot grow normally. In particular, the middle of the face and eye sockets are not formed correctly.

This often leads to breathing problems as your child grows. It also affects the shape of their head, how their face looks and how teeth in the upper and lower jaws line up.

The syndrome is named after the French doctor who first described it. Crouzon syndrome is estimated to happen in 1 out of every 60,000 newborns.

Children with Crouzon syndrome need coordinated care by providers from many areas of healthcare. At Seattle Children’s Craniofacial Center, our team of experts covers 19 different specialties.

Many of our patients are babies who are newly diagnosed. We also work with children who received their initial treatment at another hospital.

Please call the Craniofacial Center at 206-987-2208 for more information, a second opinion or to make an appointment.

The head and face of a child with Crouzon syndrome look different because of craniosynostosis —the early closing of the soft, fibrous seams between the skull bones (sutures). 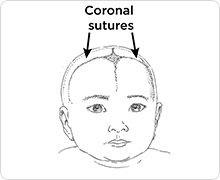 Crouzon syndrome often affects the coronal sutures that go over the top of the head from ear to ear. But other sutures also may close (fuse) early.

Usually, these sutures let the skull get bigger as the brain grows. During childhood, the sutures slowly grow together to fully connect the skull bones. The different sutures close at different times. The process continues until adulthood.

In Crouzon syndrome, the early closing of a suture usually happens before birth. But it can happen later, when a child is 2 or 3 years old, depending on the sutures affected.

If a suture closes early, it changes the shape of the head and reduces room for the growing brain. This can increase pressure inside your child’s skull.

To diagnose this condition, your doctor will examine your child’s skull carefully. The shape will help the doctor tell whether any sutures have closed too soon.

Your child’s facial features will help the doctor decide if they have Crouzon syndrome or another condition.

Your child may need X-rays of their spine and hand to rule out other syndromes.

A CT (computed tomography) scan of your child’s head can give the doctor more information and help us plan the best treatment for your child.

There is no single care plan for Crouzon syndrome. The treatments and timing we recommend depend on how your child is affected by the syndrome.

Our goal is to minimize the number of steps in the treatment plan by improving the outcome of each step.

Contact the Craniofacial Center at 206-987-2208 for an appointment, a second opinion or more information.