Our lab studies mast cell biology to understand mast cell contribution to health and disease and explore new approaches for its immunomodulation. 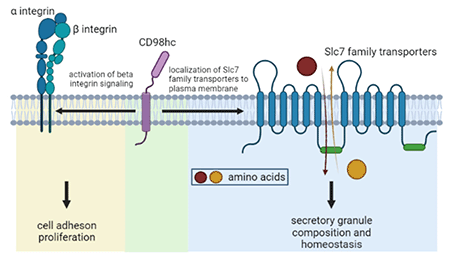 In collaboration with the James Lab

Dysregulated expansion and/or activation of mast cells have detrimental consequences in allergic disease. Consequently, there is an urgent need for therapeutic approaches to target mast cells specifically and safely. For this purpose, we conducted a study to comprehensively characterize the mast cell surface protein repertoire to further understand how mast cells can transduce signals generated in a complex environment that influences mast cell function in homeostasis and disease. This study revealed that mast cells express a large number of transporters from the Solute Carrier Protein (SLC) family. The overall goal of this proposal is to test the hypothesis that SLC transporters play a critical role in mast cell function and can be targeted to reduce the severity of mast cell-associated diseases. 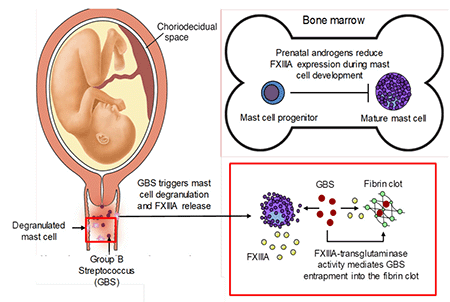 In collaboration with the Rajagopal Lab

Mast cell response to stimuli was recently described to be sexually dimorphic with female mast cells exhibiting increased ability to produce and release mediators upon activation. This suggests that female mast cells may have evolutionary advantages and an important role in innate immunity. Our studies indicate that mast cells contribute to host defense against systemic Group B Streptococcus (GBS) infection. The finding of sexual dimorphism of mast cell function is particularly relevant as GBS is associated with pregnancy associated infections apart from its ability to infect nonpregnant adults. The overall goal of this project is to test the hypothesis that female mast cells are more efficient than male mast cells in supporting innate immune defense against GBS infections.

In collaboration with the James Lab

In collaboration with the Hallstrand Lab at the University of Washington

Airway hyperresponsiveness is a fundamental feature of asthma and is the hallmark of the disease in patients with asthma. Studies from the Hallstrand Lab have shown that there is a shift in mast cells from the submucosa to the airway epithelium that is closely related to the severity of AHR as well as T2 inflammation in asthma. Our lab will collaborate with the Hallstrand group to identify the underlying basis of mast cell infiltration of the airway infiltration of the airway epithelium, the molecular details of this interaction between mast cells and primary airway epithelial cells in asthmatics and in vivo models of disease.

In collaboration with the Gross Lab at the University of Washington

Studies from the Gross Lab have revealed that neuromuscular function is a critical modulator of bone homeostasis in a mouse model of Botulinum Toxin A-induced muscle paralysis. This project is focused on the intercellular signaling that initiates acute bone marrow inflammation and subsequent bone resorption. Neurogenic inflammation has been hypothesized as potential initiator of this rapid response. Our lab will collaborate with the Gross group in studies aimed at understanding how mast cells may contribute to amplify neurogenic inflammation via histamine release.