Our new building on the hospital campus, Forest B, opens June 1. Families and visitors can park in the new Forest B garage next to Emergency.

Phosphosignaling networks are complex. Bacteria transmit signals through reversible phosphorylation using the classical two component systems, and recent genomic data, in particular from the Ocean Genome Sampling Initiative, have shown that bacteria also rely on Ser/Thr kinases for cell signaling. A case in point is Mtb, which codes for the same number of two component systems as Ser/Thr kinases. These systems are less well understood, and our view of Ser/Thr signaling is largely shaped by what is known in the equivalent eukaryotic systems. However, bacteria very likely evolved their own components and mechanisms to signal through phosphate. We are exploring these possibilities by using unbiased, systems-wide approaches to uncover new, uniquely bacterial themes in Mtb phosphorylation and its cellular effects. We also recently identified extensive phosphorylation on Tyr in Mtb, suggesting that this modification is more common in bacteria than previously thought.

More than 30% of all Mtb genes are hypothetical or unknown. This lack of annotation is a bottleneck for studying Mtb on every level. Discovering the function of unknown proteins is difficult, particularly for species-specific proteins, for which sequence-based methods of annotation fail. We are using high-throughput experimental tools to identify biochemical functions of proteins. By using chemical probes that detect activity coupled to mass spectrometric identification of target proteins, we survey the proteome for unknown activities. We provided the most comprehensive description of the ATPase family in Mtb, a large and central protein family. Combined with structural biology, we discover new protein families and explore even the most divergent sequence space. Some microbial pathogens pose even bigger annotation challenges: Less than half of all proteins in Plasmodium falciparum, for example, have known functions. We are now extending our chemical proteomic platform to also annotate unknown Pf proteins and to discover enzymes that control life cycle decisions.

Mtb causes a chronic, persistent infection that is due to slow or non-replicating bacteria. These non-replicating bacteria are drug-tolerant, requiring treatment of at least 6 months. To shorten treatment times and to avoid the emergence of heritable drug resistance, targeting persistent Mtb is a priority. However, as persisters are metabolically inactive, most drugs lose their efficacy against their targets in these non-replicating states. We use chemical proteomics to discover the physiologic pathways that are required for maintaining persistence and that remain vulnerable for therapeutic targeting during non-replication. Other organisms rely on related transitions from replication to non-replication to facilitate infection or transmission. Plasmodium falciparum, for example, develops from a replicating schizont to a non-replicating gametocyte that is poised for transmission to the insect vector. Using our chemical proteomics approach, we measure enzyme activities associated with this developmental switch and define drug targets that can interfere with Pf transmission. 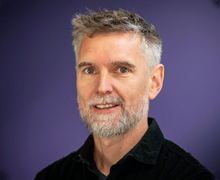 Christoph Grundner received his PhD from the University of Heidelberg, Germany, for work on HIV vaccine design at the Dana-Farber Cancer Institute, Harvard Medical School, in Boston. He continued working on HIV at the Karolinska Institute in Stockholm, Sweden, before joining Tom Alber’s group at the University of California, Berkeley for a postdoc. There, Grundner discovered his interest in Mycobacterium tuberculosis (Mtb), using structural biology and chemical tools to understand Mtb virulence mechanisms, work for which he received fellowships from the American Lung Association and the New York Community Trust, Heiser Fund. His interest in Mtb pathogenesis led him to the center, where he joined as an assistant professor in 2009. Grundner is also an affiliate assistant professor in the Department of Global Health and a member of the Molecular and Cell Biology Program at the University of Washington.