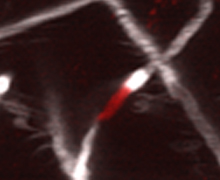 To study the mechanisms of neurotoxicity, we have developed an immunocompetent mouse model. After treatment with high dose CD19-directed murine CAR T cells, mice develop motor and balance difficulties, as well as brain microhemorrhages. Surprisingly, we found that >10% of cortical capillaries are obstructed by white blood cells during neurotoxicity. This was accompanied by capillary remodeling and decreased vessel coverage by pericytes.

We are now working to uncover the molecular mechanisms that cause white blood cells to plug capillaries during neurotoxicity. We use in vivo two-photon imaging in mice to determine which cell types cause the capillary plugging – the mouse’s own or the transferred CAR T cells? We will then measure how CAR T cell treatment changes the expression of adhesion molecules in brain capillary endothelial cells and in leukocytes, and test whether blockade of these adhesion interactions can prevent capillary plugging and neurotoxicity.

This project investigates whether biomarkers in serum, cerebrospinal fluid, or on brain imaging can predict neurotoxicity risk and measure brain injury in pediatric cancer immunotherapy patients.