The Sather Lab utilizes state-of-the-art technology to develop novel vaccine immunogens and strategies. In addition, the lab is interested in deciphering the mechanisms of antibody mediated protective immunity by HIV or malaria vaccination. The Sather Lab actively collaborates with scientists from the Fred Hutchinson Cancer Research Center, Oregon Health and Sciences University, the University of Washington and Vanderbilt University.

Antibodies are an integral part of the immune system’s defenses against invading pathogens. Produced by B cells, antibodies are able to prevent infection by blocking the invasion of host cells by the pathogen, by marking pathogens for destruction or by assisting in the destruction of infected host cells. The overwhelming majority of licensed vaccines elicit protective antibody responses, and they have a long history of providing safe and durable protection from infection from a variety of pathogens. Our goal is to develop antibody-inducing vaccines against HIV-1 and malaria-causing parasites. However, despite intensive research efforts, the development of protective vaccines for these diseases remains elusive. Our approach involves developing a fundamental understanding of the mechanisms by which these pathogens interact with the host immune system and by evaluating the mechanisms of protective immunity. By deciphering how the pathogen interacts with the host and how the host can defeat the pathogen, we will be able to identify and exploit targets to be developed as antibody-inducing vaccines.

One of the major areas of study for the Sather Lab is the natural development of broadly neutralizing anti-HIV-1 antibodies (bNAbs). These bNAb provide a natural prototype that we hope to re-elicit by vaccination. This research involves a “feedback loop,” in which we study anti-HIV-1 antibody responses generated during the course of natural infection with the goal of informing the design and production of novel HIV-1 immunogens. Our studies have keyed in on the early immunological and viral events that occur as broadly neutralizing activity develops during natural infection within the first several years after infection. We are evaluating the interaction between host humoral responses and Envelope protein evolution (mediating viral escape) throughout this process. Recently, we discovered that in several HIV-1 positive subjects, the progenitor, immature bNAbs were present in the serum long before neutralizing activity became evident. Further, we found that viral escape did not occur until after the appearance of neutralizing activity, months after the initial appearance of the pre-bNAbs. Thus, there exists a time period early during infection when immature pre-bNAbs are circulating and being stimulated by viral antigen, and it is unclear why in some subjects those mature into full bNAbs. Our focus moving forward is to delve into understanding bNAb progenitor B cell population dynamics and their relationship to an evolving viral infection.

In addition to studying antibodies generated during natural HIV-1 infection, the Sather Lab is also engaged in understanding vaccine-elicited antibody responses. We focus on understanding how vaccination with HIV-1 Envelope (Env) immunogens drives evolution of specific antibody gene families and on assessing vaccination-driven antibody maturation using non-human primates and humanized mice as our primary pre-clinical models. Our major vaccination models include assessing both systemic and oral vaccination models, in order to understand how vaccination parameters modulate the character of the resulting immunity. These studies focus on both neutralizing and non-neutralizing antibodies, as both are likely to contribute to protection. We have deployed Illumina deep sequencing as a tool to understand vaccine-elicited B cell receptor (BCR) responses at the sequence repertoire level. This allows us to study in great detail the types of naïve BCRs that are available for stimulation by our vaccine immunogens and to understand the dynamics with which BCRs are stimulated by vaccination with Env immunogens. In addition to tracking BCR stimulation, we can study how far we are able to drive somatic hypermutation by vaccination and whether we are driving somatic hypermutation in directions that may be advantageous for anti-HIV-1 activity. We are working toward using this system to monitor responses to our vaccines in near real time, in order to relay feedback into our immunogen design efforts. In total, this platform allows us to delve deeper than ever before to understand vaccine-elicited B cell responses against HIV-1 and to understand whether our vaccines elicit antibodies that could potentially develop into broadly neutralizing antibodies.

The other major research focus in the Sather Lab is the development of antibody-inducing vaccines against malaria-causing parasites. Our vaccine development efforts focus on Plasmodium falciparum, the primary cause of severe malaria disease and the most deadly form of the parasite, and P. vivax, the most geographically wide-spread form of malaria. The Plasmodium life cycle is complex, involving multiple stages in both humans and mosquito vectors, with each stage having a unique genetic program. This diversity makes the malaria parasite a difficult vaccine target. We target the pre-erythrocytic stages of malaria, the infectious form of the parasite. The sporozoite develops in the salivary glands of the mosquito and is injected into the skin when the mosquito bites the skin to take a blood meal. After entering the skin, the sporozoite makes its way to the bloodstream, eventually invading the liver to being the next stage of infection. Stopping the sporozoite prior to entering liver cells is a primary goal of vaccine-elicited immunity, as it will prevent productive blood stage infection. In the case of P. vivax, some liver stages form dormant stages and reactivate months to years later to cause disease. As around 90% of P. vivax blood stage infections are from dormant form relapse, stopping the formation of the dormant form would profoundly affect the pandemic. Our goal is the identification, characterization and development as vaccine immunogens of protein antigens expressed on the surface of the infectious sporozoite. In partnership with Dr. Stefan Kappe, we have identified a number of potential protein antigens that are located on the surface of the sporozoite. We are in the process of developing these proteins as vaccine immunogens, and several promising candidates are in the vaccine pipeline for both Plasmodium species.

Despite a tremendous body of research on malaria infection, little is known about the specific host-pathogen receptor/ligand interactions that are necessary for parasitic invasion. Our studies provide an unprecedented opportunity to define at the molecular level the host-pathogen interactions necessary for parasitic invasion, which will have both clinical and vaccine implications. Thus, in parallel to our antigen design efforts, we are leveraging our capabilities to begin to define the potential interactions of Plasmodium proteins with host receptors in the pre-erythrocytic and blood stages. In a sense, this creates a vaccine development/host-pathogen interaction feedback loop, similar to what we have in our HIV-1 studies. These efforts have already begun to pay dividends. In collaboration with Dr. Alexis Kaushansky, we have begun to identify potential Plasmodium protein-host receptor interactions that may be necessary for liver cell invasion. Subsequent to these findings, we have already advanced some of these Plasmodium targets into pre-clinical vaccine studies. Overall, these studies will be very informative toward the selection of potential vaccine targets and will fill in significant holes in our understanding of the molecular mechanisms of Plasmodium invasion and infection.

Our newest efforts in malaria involve studying the effect of pre-existing immunity on vaccine efficacy against malaria. Anti-malarial vaccine candidates have been very effective in the laboratory setting, but show drastically reduced efficacy in endemic populations. In partnership with Dr. Alexis Kaushansky, we have been awarded a Keck Family Foundation Research Grant to begin to unravel the biological and immunological reasons for reduced vaccine efficacy. These studies will focus on evaluating the interactions between host immunity and invading pathogens, with an emphasis on conducting studies with single-cell resolution. We hope to identify how the presence of partial, non-effective immunity perturbs the development of protective vaccine responses. 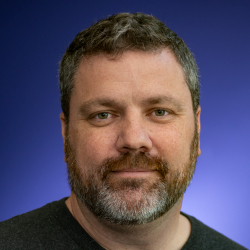 Noah Sather, PhD, is an associate professor at the Center for Global Infectious Disease Research. He joined the center in 2015 to advance its programs in vaccine development for HIV-1 and malaria. Sather received his PhD at Wayne State University in biological sciences, where his thesis work focused on a systems analysis to unravel the secrets of developmental biology. He joined the center as a postdoctoral fellow in the laboratory of Dr. Leo Stamatatos, where he worked to understand how anti–HIV-1 antibodies develop. Outside of the lab, he enjoys hanging out with his kids, kayaking, snowboarding and camping.