I have over 30 years’ experience in parasite molecular biology, genomics and bioinformatics and, more recently, structural biology and drug development. After graduate work on malaria antigen identification, I undertook post-doctoral training in molecular biology; studying antigenic variation in African trypanosomes and Anaplasma. During the last post-doctoral period (at the Seattle Biomedical Research Institute [SBRI]), I began to study Leishmania gene expression and developed expertise in DNA sequencing and bioinformatics. This led to my directing the L. major and T. cruzi genome sequencing projects; an interest that continues until the present as consultant for trypanosomatid genome database (TriTrypDB). Since the mid 1990’s, I have been at the forefront of applying genomic technologies (such as expression profiling and proteomics) to increase our understanding of molecular mechanisms underlying trypanosomatid transcription and regulation of gene expression during differentiation. My laboratory has recently started making extensive use of NGS technology for genome re-sequencing, mRNA profiling (RNA-seq) and chromatin immunoprecipitation using sequencing (ChIP-seq) in several Leishmania species, once again being at the forefront of this technology for the trypanosomatid field. In 2001, I became actively involved in structural genomics, leading the Target Selection portion of the Structural Genomics of Pathogenic Protozoa (SGPP) project. I am currently PI and director of the Seattle Structural Genomics Center for Infectious Disease (SSGCID), which is funded under a contract from the National Institute of Allergy and Infectious Diseases (NIAID). The mission of SSGCID is to use X-ray crystallography, Cryo-electron microscopy and NMR spectroscopy to solve the structure of proteins targets in emerging and re-emerging infectious disease organisms, primarily to facilitate development of new therapeutics using structure-based drug design.

Beginning in the late 1980s, I started leading the efforts in Ken Stuart's lab at the Seattle Biomedical Research Institute to sequence trypanosomatid mitochondrial (maxicircle and minicircle) and viral (LRV1) genomes, as well small circular and linear amplified DNA elements of Leishmania. This culminated in my taking a leading role in the worldwide consortium (Seattle Biomed, Wellcome Trust Sanger Institute, the Institute for Genome Research and Uppsala University/Karolinska Institute) to sequence the TriTryp genomes (Leishmania major, Trypanosoma brucei and Trypanosoma cruzi), which were (largely) completed and published in 2005. Since that time my group has maintained an active involvement in the sequence, annotation and curation of more trypanosomatid genomes, and I was co-PI on the original BMGF grant to establish and maintain TriTrypDB (the definitive database for trypanosomatid genomics data). During this time, my team has developed a number of software pipelines for genome annotation and analysis, and continues to be one of the leaders in this effort for these specialized genomes. More recently, this has extended to data generation and analysis using several next-generation sequencing platforms.

Epigenetics and Transcription in Leishmania

The very first cosmid clone from the Leishmania major genome that we sequenced at Seattle Biomed in 1997 offered insight into the unusual gene organization of trypanosomatid genomes – it contained a divergent strand-switch region (as it turned out, the only one on all of chromosome 1). Over the next 10 years, my laboratory was at the forefront in defining the genomic elements and chromatin modifications involved in transcription initiation in Leishmania, as well as defining many of the protein components of the RNA polymerase II and III initiation and elongation complexes. After a brief hiatus in the late 2000s, these activities have been re-kindled by my involvement, in collaboration with the Borst group in Amsterdam, in showing that the trypanosomatid-specific modified DNA base J plays an important role in transcription termination in Leishmania. I am now PI on an NIAID grant investigating the sequence elements and protein machinery involved in J insertion and maintenance, as well as molecular mechanism(s) underlying its involvement in transcription termination.

In 2003, I began collaborating with Dan Zilberstein at the Technion – Israel Institute of Technology to utilize the rapidly emerging tools available for genome-wide elucidation of changes in gene expression occurring during Leishmania promastigote-to-amastigote differentiation, using an axenic system that his group had established. The collaboration has proven remarkably fruitful, as we used a USI-BSF grant to support microarray and LC-MS/MS analysis and show that there is a well-coordinated program involved changes in mRNA and protein abundance of several hundred genes during this differentiation process – challenging the dogma at the time, which held that trypanosomatid gene expression was generally constitutive. This work has continued with the introduction of new technologies, such as RNA-seq, ribosome profiling (in collaboration with Marilyn Parsons at CID Research) and phosphoproteomic analyses, to generate the extensive datasets needed for a true systems approach to understanding the molecular processes involved in Leishmania differentiation. I have also collaborated with other Leishmania researchers to extend these analyses to identify the regulatory networks underlying the response to other environmental stimuli, and we are now on the brink of being able to test some of these hypotheses experimentally.

In 2001, I began working in the field of structural genomics, being co-PI on the National Institute of General Medical Sciences (NIGMS)–funded Structural Genomics of Pathogenic Protozoa (SGPP) project headed by Wim Hol at the University of Washington. Because of my involvement in the TriTryp genome sequencing projects, my group performed all target selection for SGPP. I am currently PI and director of the Seattle Structural Genomics Center for Infectious Disease (SSGCID), which has been funded under a contract from NIAID since 2007. The mission of SSGCID is to use X-ray crystallography and NMR spectroscopy to solve the structure of proteins targets in emerging and re-emerging infectious disease organisms, primarily to facilitate development of new therapeutics using structure-based drug design, and toward this goal we have solved ~800 protein structures. SSGCID is extremely collaborative, providing clones, purified protein and structures to over 200 investigators around the world. Several of these collaborations have resulted in additional funding from sources such as the National Institutes of Health (NIH), Bill & Melinda Gates Foundation (BMGF) and NATO. One particular success is the Structure Guided Drug Design Consortium (SDDC), which works closely with MMV and the TB Alliance to generate hit-to-lead compounds for malaria and TB. 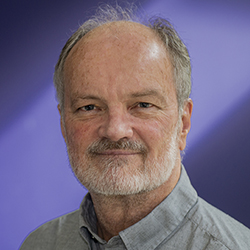 Peter Myler, PhD, is professor at the Center for Global Infectious Disease Research. He earned his PhD in biochemistry in 1982 from the University of Queensland while studying malaria proteins at the Queensland Institute of Medical Research in Brisbane, Australia. After post-doctoral research on antigenic variation in African trypanosomes at the Issaquah Health Research Institute (the predecessor to Seattle Biomed, the Center for Infectious Disease Research and the Center for Global Infectious Disease Research) and Washington State University, he returned to Seattle Biomed in 1985 and played a leading role in its subsequent development. Myler began an appointment as assistant professor in pathobiology at the University of Washington in 1993 and continues as affiliate professor in the Departments of Global Health and Biomedical Informatics & Medical Education, as well as a member of the Molecular and Cellular Biology program. Since the mid 1990’s, he has been at the forefront of applying genomic technologies (such as expression profiling and proteomics) to increase understanding of molecular mechanisms underlying regulation of gene expression during Leishmania differentiation. In 2001, he became actively involved in structural genomics, and is currently director and PI of the Seattle Structural Genomics Center for Infectious Disease (SSGCID), which is funded under a contract from NIAID. In his spare time, he can be found enjoying his vacation cabin on Camano Island with his family, riding his bike and educating the uninformed masses about the science and art of cricket.

For questions or inquiries,
email: peter.myler@seattlechildrens.org