What is the Aerodigestive Program? 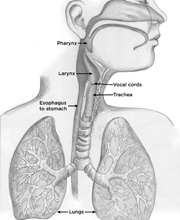 At Seattle Children’s Aerodigestive Program, we treat children, from birth to age 21, who have complex upper airway, breathing and swallowing problems. The word “aerodigestive” combines “aero,” which means “air,” and “digestive.” In this program, we treat airway and digestive tract issues that are closely tied together. These problems can involve a child’s:

How will the Aerodigestive Program meet my needs?

Who’s on the team?

Aerodigestive Program caregivers have special training not only in their fields, but also in the unique needs of children and adolescents.

If you have a referral or would like a second opinion, or for more information about the Aerodigestive Program, call 206-987-6587.

Schedule an appointment with the Aerodigestive Program

You may be offered a telehealth (virtual) appointment. Learn more.

If you are a referring physician and would like to talk to a member of the Aerodigestive team about a patient, call the Otolaryngology nurse line at 206-987-2105. Even if you are unsure about whether your patient should be seen by us, we want to help you with any questions you might have.

What should I bring to my child’s appointment?

Resources for Patients and Families

Learn about paying for care at Seattle Children’s, including insurance coverage, billing and financial assistance.

Get resources for patients and families, including information on food, housing, transportation, financial assistance, mental health and more.