We are pioneering ways to use catheters to repair complex heart problems, reduce complications and help kids recover faster. 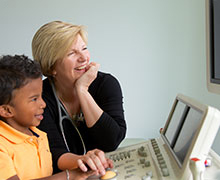 Michael Frey, 4, receives the care he needs close to his home in Anchorage at Seattle Children’s Pediatric Cardiology of Alaska.

When a foster care agency asked Judith and Andy Frey to care for a newborn with multiple heart defects in 2011, they were torn. The baby, named Michael, was in the neonatal intensive care unit and his doctors said he might have only a few months to live.

The Freys had fostered several babies but weren’t sure they could manage one who needed a feeding tube, oxygen and a dizzying array of medications. Still, they agreed to visit Michael at the hospital near their Anchorage home.

“It was love at first sight,” Judith Frey remembers. “We decided to help him make the most of whatever time he had.”

Just two months later, she and Michael were taken by medevac to Seattle Children’s when the level of oxygen in his blood plummeted. Here, Dr. Troy Johnston inserted a catheter – a very thin, plastic tube – into one of Michael’s veins and used sophisticated imaging equipment to guide it into his heart. Then he pushed a stent through the catheter and used it to widen the artery that carried blood from Michael’s heart to his lungs.

“It saved Michael’s life and kept him going until he was big and strong enough to have heart surgery,” Judith Frey remembers.

Heart defects are one of the most common birth defects, affecting about one in 100 children. Thanks to today’s advanced heart surgeries, more of these children than ever are surviving into adulthood and leading productive lives. But heart surgery is highly invasive, carries long recovery times and opens the door to complications and serious side effects.

When Dr. Thomas Jones started his career at Seattle Children’s in 1983, he saw cardiac catheterization’s potential to revolutionize care for kids with heart defects, who are among the sickest children to come through our doors.

“Cardiac catheterization was in its infancy back then – we used it look inside kids’ hearts so we could understand their problem and their anatomy. Then we handed them over to the surgeons for treatment,” Jones says. “Unfortunately, a lot of those kids didn’t make it because they weren’t strong enough to endure multiple surgeries.”

Jones resolved to take catheterization to the next level by developing procedures that could repair heart problems, were less invasive than surgery and gave children a better chance to survive and thrive. He spent the past three decades building a team of interventional cardiologists, nurses and technicians who have helped pioneer catheterization procedures used by doctors around the world.

This year, our interventional cardiology team will perform nearly 700 cardiac catheterization procedures. They will insert stents, replace defective valves, clear blocked arteries and monitor the hearts of children who received transplants. These procedures didn’t exist 30 years ago and our team helped develop many of them. Today, families come to Seattle Children’s for these procedures from faraway states, drawn by our reputation for using cardiac catheterization in innovative ways that help children lead happier, healthier lives.

When a teenager came into Seattle Children’s feeling strangely fatigued, our team discovered that the patient’s aorta – the main artery that carries blood from the heart – had been blocked since birth. The patient’s heart had developed extra vessels to carry the blood. Jones worked with our cardiologists and surgeons to devise a way to use a catheter to burn through the blockage, instead of surgery. Then he inserted a stent to keep it open.

“He basically built a new aorta. Very few doctors would even try something that complicated,” says Sarah Lisinksi, a nurse who manages our cardiac catheterization laboratories.

After finishing his fellowship at Boston Children’s last year, Dr. Brian Morray was invited to stay for more advanced training in interventional cardiology. Instead, he chose to complete his training at Seattle Children’s, partly because of our long track record of developing game-changing catheterization devices, like the Melody transcatheter pulmonary valve.

In the late 2000s, research at Seattle Children’s helped prove that this artificial heart valve (placed on a catheter and guided to the heart through a vein) is safer than, and just as effective as, open-heart surgery. Jones is among a small handful of doctors with the expertise to insert the valve.

“Instead of a big incision across the chest, these kids get a nick in the thigh so we can access their vein. Then we put in the Melody valve and they go home the next day,” says Jones.

Now our team is designing and testing a new wave of devices that could improve cardiac catheterization and fix a wider variety of heart problems. We are currently participating in eight clinical trials of new devices.

“It’s not enough to have good ideas – you have to know how to turn them into actual therapies, conduct clinical trials and navigate FDA approval,” Morray says. “I wanted to learn from the best.”

Jones and his team regularly demonstrate the latest techniques and devices to interventional cardiologists throughout the world. Our new cath lab contains a television-quality broadcast studio to make it easier to provide these teaching demonstrations.

“During our live broadcasts to cardiology conferences, we can show other doctors how we fix certain problems and answer their questions along the way,” Jones says. “And having the equipment in house lets us switch on the cameras when we run into something unusual or try something new, so we can evaluate our work and find ways to improve.”

The new facility is the first pediatric catheterization lab in the nation with imaging equipment (called angiography) that creates three-dimensional images of children’s hearts and blood vessels.

“The incredible detail in the 3D images helps us plan the best route into the heart and quickly see if a repair is working,” Jones says. “This means we can get things right the first time, in less time – which is better for our kids.”

The new imaging equipment also emits far less radiation than that in the old cath lab, which reduces the risk of future health issues (like cancer) for our patients. That’s especially important for patients like Michael Frey, who had his first heart surgery shortly before his first birthday.

A few days later, Jones discovered that Michael’s heart was creating new blood vessels that stole blood from parts of his body that needed it. The Freys, who adopted Michael in 2012, flew to Seattle several times so Jones could block those blood vessels. This kept Michael alive, but he was so weak that even trying to eat was a struggle.

Jones recommended a heart transplant when Michael was 2. Judith Frey packed her bags and moved with Michael to Ronald McDonald House, with high hopes for a new heart.

Only two months later, Michael underwent a transplant. A year and a half later, he has the energy to tromp through mud puddles and play with other kids for the first time in his life.

“We never could have gotten this far without Seattle Children’s,” Andy Frey says.

Like most children who receive new hearts, Michael needs to come back once a year to make sure his heart is functioning well and to repair it when something goes wrong. While Jones takes pride in these success stories, he and his team are focused on taking catheterization to the next level so it can help many more children.

“There are frontiers of treatment that we’ve barely begun to explore,” he says. “We want to probe the boundaries of what’s possible and find new and unique ways to care for kids.”

“We want to probe the boundaries of what’s possible and find new and unique ways to care for kids.”