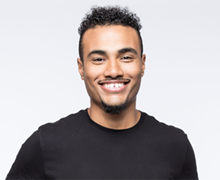 “I want to do something that's worthy of my life being saved,” Wright said.

Milton Wright III has only worked at Seattle Children's for a couple months, but the hospital has been his second home for much of his life.

Today, Wright is back at Seattle Children's – not as a patient, but as an employee and a symbol of hope.

Growing up at Seattle Children's

Wright, now 24, is a certified nursing assistant (CNA) in Seattle Children's Pediatric Intensive Care Unit (PICU). He first came to the hospital when he was just 8 years old.

“My family and I were living in Arizona when I became terribly ill,” Wright said. “I was in pain, lethargic and only weighed as much as my 2-year-old sister. No one could figure out what was wrong with me until I came to Seattle Children's”

Wright was diagnosed with acute lymphoblastic leukemia (ALL). After three-and-a-half years of chemotherapy, he and his family believed he was cured. But Wright would relapse at age 15, and again when he was 20.

Wright remembers limping to Seattle Children's Emergency Department (ED) from his nearby apartment five years ago. He'd fallen on a metal handrail while playing basketball and hurt his ribs. He was struggling to breathe.

Blood and bone marrow tests revealed Wright's cancer was back – a third time. He didn’t believe there were any treatment options left.

“I'd known friends who'd died after their third cancer diagnosis,” Wright said. “I figured they’d give me my six months.”

But Dr. Rebecca Gardner, a principal investigator with Seattle Children's Research Institute, had other plans for Wright. The research institute had recently opened a clinical trial, Pediatric Leukemia Adoptive Therapy (PLAT-01), treating relapsed ALL with – an experimental therapy that reprograms a patient’s immune system to fight cancer cells.

The trial offered Wright a chance to survive. At the time, only one other patient had been treated with this therapy. Wright would be the second.

“It sounded like a miracle,” Wright said. "It was a risk I had to take. There were no other options.”

Wright was relieved to learn that cancer immunotherapy would require less chemotherapy than his previous treatments.

“I had a combined six years of chemotherapy at that point, so when they said I would only need three months of treatment, that was amazing,” he said.

But Wright's treatment would not be easy.

After his immunotherapy infusion, Milton spiked a fever and his vital signs diminished. Cardiomyopathy, caused by years of chemotherapy, threatened his life. He was sent to the PICU – where he works today.

“I remember waking up and hearing doctors in my room talking about stopping my treatment,” he said. "They said 'We don't think your heart can handle it.' But I knew there were no other options. I told them, 'Let's keep going.'”

Within a few days, Wright's condition improved and he was moved back to Seattle Children's Cancer and Blood Disorders Center - Inpatient. He would go on to have a bone marrow transplant and has been cancer-free ever since – for nearly five years.

“I am so grateful to Seattle Children's for every day I'm alive, every day I've survived. Now I want to make my life count,” Wright said.

Shortly after he completed treatment, Milton moved to Coeur d’Alene, Idaho, and began looking for work and a sense of direction. He took a job providing geriatric care in a nursing home, where his employers offered him the opportunity to earn his CNA.

“That’s when I began to consider working in the medical field,” Wright said. “I thought, maybe my life was saved so I could save other people like me.”

At the same time, Wright was introduced to a young woman being treated for cancer back in Seattle. She’d heard Wright’s story and reached out to him on Facebook. For months, she confided in Wright and he did his best to support her.

“Even though she was in constant pain, and knew she was going to die, she didn’t want to tell her family. But she felt like she could tell me. It broke my heart,” he said. “Even today, I think about everything she would have done with her life. That’s what drives me.”

The experience brought Wright clarity and resolution in his decision to pursue a career caring for others.

Wright earned his CNA and worked for a year at a hospital in Coeur d’Alene. All the while, he had one goal in mind: to come back and work at Seattle Children’s.

CNA criteria differ between Idaho and Washington, so Wright had to take additional classes and register as a CNA in Washington before he could return. After that, he spent months applying for positions at Seattle Children’s until he was invited to interview.

He said, “I think one of the oncology charge nurses saw my application and declared, ‘Oh get him in. He’s the perfect fit.’”

Wright was hired as a CNA in Children’s PICU in March 2018.

“Milton has always been a bright spot at Seattle Children’s,” Lauren Huang, an ARNP who cared for Wright during his cancer immunotherapy treatment, said. “He’s been through a lot, but he remains positive, warm and genuine. Seeing him in the hallways always brings a smile to my face.”

Some cancer survivors avoid the settings where they were treated, haunted by memories of taxing therapies and severe illness. But Wright says he’s never felt that way about Seattle Children’s. In fact, much the opposite.

“The nurses and doctors at Seattle Children’s became my family over the years,” he said. “While they were saving my life, I got to know them. Nurses would visit me during their breaks to hang out and watch TV with me. The hospital became a home to me. I enjoy being here, even on my days off.”

Wright fondly remembers the providers who cared for him, but it’s clear he was most impacted by the patients he met throughout his cancer journey.

“I think about them every day,” he said. “When I was first diagnosed, my family lived in the Ronald McDonald House and I immediately connected with patients there. I remember watching my mother hold a crying girl who had a terminal disease and rocking her back and forth. There was nothing else we could do for her. I have so many stories like that.”

Generally reserved and soft-spoken, Wright mostly keeps to himself, except when it comes to patients. Since completing his immunotherapy treatment, he’s made efforts to connect with other patients and families undergoing cancer treatment at Seattle Children’s.

Working in the PICU, he enjoys spending time with kids – like him – who are facing serious illnesses.

Wright remembers one of the first patients he connected with as a Seattle Children’s employee – a young toddler with cancer. He describes watching hours of television with the child when his parents couldn’t be there and letting the boy squeeze his fingers when nurses had to poke him.

“When I’m with a patient, it’s all about comforting them,” Milton said. “I don’t try to tell them my story. I’m just there to lift their spirits. It makes me feel like I’m doing something worthy of my life being saved.”

His colleagues see his compassion.

“Milton’s insight, having been a patient, means he can empathize with and encourage our patient families,” said Jen Sorensen, clinical practice manager in the PICU. “He values this institution for what it did for his own life and offers a unique perspective to his colleagues.”

Despite enduring years of cancer treatment, Wright is healthy today and planning his future. He is currently in school, working toward a nursing degree.

While he emphatically says he “does not like school,” Wright is determined to expand his education so he can continue caring for others.

When asked if he would like to be a nurse at Seattle Children’s one day, Milton does not hesitate.

“Yes! To be at the hospital where I was treated and where my life was saved – I can’t even count how many times – it’s incredible,” he said. “I never want to leave.”

As Wright approaches the five-year anniversary of his cancer immunotherapy treatment, he knows his continued remission is not guaranteed. But he does not dwell on what the future might hold or the years of treatment he’s had to endure. Instead, he takes life “day by day,” and appreciates the opportunity to be alive and help others.

“I wouldn’t be doing what I am doing now if I hadn’t gone through everything,” Wright said. “It is rewarding to inspire hope in patients and families and show them that they, too, can have a fulfilling life.”