Engineering B Cells for Future Therapies 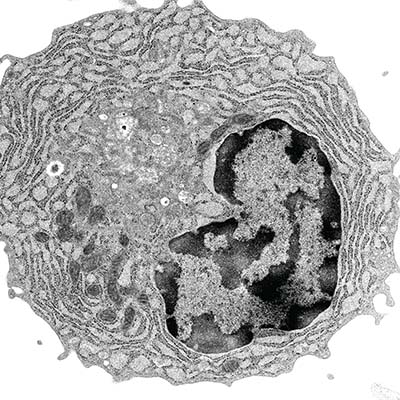 New findings from Seattle Children’s Research Institute’s Center for Immunity and Immunotherapies show engineered human antibody-secreting B cells can survive for greater than a year in a living model, which could pave the way for a new and longer-lasting delivery method for protein therapies.

B cells play a central role in the immune system. When the body is confronted with an infection, B cells mature into plasma cells that release protective antibodies that fight ongoing infections and prevent future ones.

Due to plasma B cells’ unique longevity — they reside in the bone marrow for decades — and capacity to secrete high levels of protein, plasma cells have the potential to be used as an engineered cell therapy for protein replacement. This new engineered cell therapy may be superior to current protein delivery methods that require weekly or even more frequent dosing. Biologic protein drugs are used to treat many diseases, including cancer, autoimmune disorders and protein deficiencies.

“This is first proof of concept in a small-animal model that plasma B cells can live indefinitely after being engineered,” said co-corresponding author Dr. Richard James, principal investigator in the research institute and associate professor in the departments of Pediatrics and Pharmacology at the University of Washington School of Medicine.

“Antibody-secreting B cells can produce thousands of protein molecules per second for decades,” James said. “We are using gene editing to create B cells that can stably produce therapeutic proteins instead of antibodies, for use in patients. In this study, we have built a system where we can study these cells in a way that will be more like what they would experience in a person.”

James collaborated with co-corresponding author Dr. David Rawlings, director of the Center for Immunity and Immunotherapy at Seattle Children’s and professor in the departments of Pediatrics and Immunology at the University of Washington School of Medicine. Their findings were published in Nature Communications.

“B-cell therapies may transform the delivery of biologics by potentially curing disease with a single injection,” James said. The researchers found engineered human plasma cells exhibit many of the useful traits of normal human plasma cells, including capacity for high protein production and longevity.

The research team learned that human cytokines (cell signalers) are needed to study human plasma cells in mouse models. “The model is imperfect because the mice are expressing mouse cytokines that don't interact with the receptors on the human cells,” James said.

The mice used in the study lacked immune systems so they would not reject human cells. Future research will be done in an immune competent model to demonstrate that drug-secreting B cells can function in the context of an intact immune system.

Additional next steps include creating a manufacturing process for producing drug-secreting B cells and proving that such cells have functional impacts in animal models of disease.