Welcome to the Turner Lab

The habenula is a poorly understood region of the brainstem residing just dorsal to the thalamus, with distinct medial and lateral subnuclei. Essentially the entire output of the medial habenula (MHb) is directed to the interpeduncular nucleus in the midbrain tegmentum. Neurons in the ventral MHb produce acetylcholine, but use glutamate as their primary fast neurotransmitter. The function of this circuit, and its modulation by nicotine and nicotinic receptors, is an area of active research in our lab (Hsu, et al 2013: Quina et al. 2016). Neurons in the dorsal MHb are distinguished by the expression of neuropeptides such as substance P, and form a distinct circuit. In Hsu et al, 2014, we demonstrated that this circuit is required for the rewarding effects of wheel running exercise, and that optogenetic stimulation of this area is intrinsically reinforcing; we postulate that the dorsal MHb has an important role in mood regulation.

Structure and function of the lateral habenula system

Recently we have begun studies of the lateral habenula (LHb), which forms a system functionally distinct from the MHb. There has been a great deal of recent interest in the role of LHb outputs to the dopamine system in reward prediction error. However, our anatomical studies indicate that the majority of LHb outputs go to areas of the brain associated with serotonin signaling. Our functional studies of the LHb will focus on these pathways.

Function of the ascending Relaxin3 system of the nucleus incertus 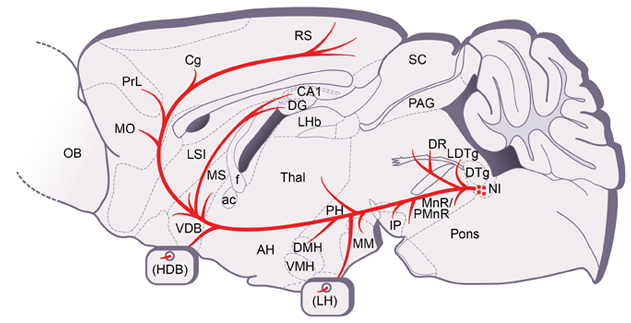 The nucleus incertus is another brainstem nucleus of poorly understood function, characterized by the expression of an insulin-family peptide, relaxin3. This system receives descending input from the habenula and interpeduncular nucleus, then projects widely to the limbic system, in a pattern resembling the dopamine and serotonin systems. In a new area of research for the lab, we are designing genetic approaches to the function of this system in transgenic mice.

Development of combinatorial genetic models for behavior and circuit mapping

In order to provide a new set of tools for high-resolution optogenetic studies of brain function, we collaborated with the Allen Institute to characterize a set of Cre recombinase-inducible optogenetic mice that allow the expression of a Channelrhodopsin activator or a Halorhodopsin silencer in any neural population that can be defined by a Cre-driver mouse line, of which there are many. Now that these mice have been distributed to the neuroscience community through the Jackson Laboratories, their use is expanding rapidly.

Other Areas of Investigation

See other recent studies in the Turner Lab: Transcriptional regulation of neuronal development and morphogenesis of the external ear. 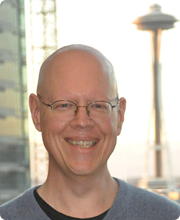 Eric E. Turner, MD, PhD, is a principal investigator at Seattle Children’s Research Institute’s Center for Integrative Brain Research and a professor in the Department of Psychiatry and Behavioral Sciences at the University of Washington.