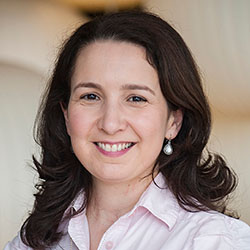 Dr. Ghayda Mirzaa is pinpointing the genes that contribute to many neurodevelopmental disorders. She helped discover many genes that cause focal cortical dysplasia, megalencephaly and microcephaly. This work is opening the door to new treatments that could modify or fix the errors in these genes.

Mirzaa and her colleagues traced a group of brain disorders known as focal cortical dysplasia to mutations in a gene that produces the mTOR protein, which is essential in regulating cell growth and function. Focal cortical dysplasia is among the leading causes of intractable (resistant to therapy) epilepsy in the pediatric population. Increasingly frequent seizures – up to more than 50 a day – begin soon after a child is born and lead to developmental disabilities, frequent trips to the hospital and, in extreme cases, early death.

The mutations discovered by Mirzaa and her colleagues cause the mTOR signaling pathway to become overactive. The affected neurons grow unusually large and misshapen, leading to brain malformations, cognitive delays and epilepsy.

A number of drugs that inhibit mTOR mutations are already in use or in development to treat cancer. Now Mirzaa is part of a team that’s investigating whether those treatments can be used to treat focal cortical dysplasia and prevent potentially devastating complications. This could someday spare children from the brain surgery that is often needed to stop intractable epilepsy.

Identifying the Genes That Cause Microcephaly

Mirzaa and her colleagues are uncovering the genes that cause microcephaly, which occurs when a child’s head and brain are unusually small. Mirzaa is part of a team that used next-generation sequencing to sequence the genes of more than 100 children with microcephaly. This is a key step toward identifying the genes that contribute to microcephaly and understanding how it develops. As more genes are identified, it will create opportunities to test and develop new therapies that could disarm these genes and help children with microcephaly lead healthier lives.

View a complete list of Mirzaa’s publications on PubMed.