The Aldinger Lab uses developmental neuroscience and computational approaches to decipher the mechanisms that cause pediatric neurogenetic disorders and pathologies associated with structural brain changes, cognitive impairment, and epilepsy.

Brain development is shaped by both genetic and environmental drivers. Our exome sequencing analysis of patients with structural cerebellar abnormalities found that cerebellar malformations are features of monogenic neurodevelopmental disorders, confirmed a major contribution for non-genetic prenatal risk factors in their etiology, and found that the expression of cerebellar malformation genes is concentrated in limited cell types of the developing human cerebellum, including neuronal progenitors and endothelial cells.

We are now introducing patient-derived variants into human neuronal cell lines and iPSCs to investigate the differential contributions of rare gene variants to neuronal and vascular development.

We are continuing our gene discovery and human cell atlas work to expand the sensitivity and specificity of developmental multiomic datasets. We are integrating large-scale datasets to provide context for interpreting relationships between candidate genes and disease and to examine the biological mechanisms underlying the clinical, molecular, and cellular phenotypes of neurodevelopmental disorders.

Microtubule-associated serine/threonine kinases (MAST) are large enzymes that share a domain of unknown function (DUF1908), a serine-threonine kinase (STK) domain, and a postsynaptic density protein-95/discs large/zona occludens-1 domain (PDZ). Several of the MAST family members are newly recognized as developmental brain disorder genes, but little is known about these genes’ properties and functions.

Our research focuses on deciphering the role of MAST4 in brain development, the impact of MAST4 mutations to the developing brain, defining the MAST4 interactome, and model development for preclinical research. 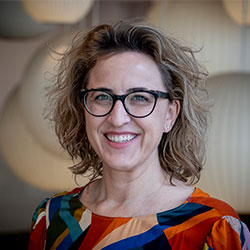 Dr. Kimberly Aldinger is an assistant professor of Pediatrics in the Division of Genetic Medicine and an adjunct assistant professor of Neurology at the University of Washington. She is also a principal investigator in the Center for Integrative Brain Research at Seattle Children’s Research Institute. Dr. Aldinger completed her Bachelor’s degree in Biology at Brandeis University, her Master’s degree in Psychology at Harvard University, and her PhD in Neurobiology at the University of Chicago. Following her graduate work, Kimberly trained as a post-doctoral fellow in developmental neuroscience at the University of Southern California in Los Angeles, before accepting a position at Seattle Children’s Research Institute.

The Aldinger laboratory studies the genetics and development of pediatric neurological disorders. The aim of this work is to understand how genetic and cellular changes lead to specific clinical symptoms, with the hope that a better understanding of disease pathways will lead to more effective and targeted therapies for pediatric neurogenetic disorders.

View a complete list of Dr. Aldinger’s publications on PubMed.