The Smith Lab studies endothelial dysfunction associated with infection with Plasmodium falciparum. A major virulence determinant of P. falciparum infection is the sequestration of infected red blood cells to the endothelial lining of blood vessels. Sequestration allows parasites to avoid passage through the spleen where they would be eliminated, but it can act as a trigger for severe malaria when large numbers of infected red blood cells accumulate in critical organs, such as the brain (cerebral malaria) and placenta (malaria during pregnancy). A major research interest for the Smith Lab is to decipher how infected red blood cells attach to different microvascular beds and understanding vascular disease mechanisms caused by sequestered parasites.

Binding of infected red blood cells to blood vessels is mediated by a large and diverse family of parasite adhesion proteins, called PfEMP1. To avoid immune destruction, malaria parasites use a sophisticated strategy called clonal antigenic variation to specifically express only one PfEMP1 on the red blood cell membrane at a time and vary expression between PfEMP1 family members. This immune evasion strategy enables parasites to stay one step ahead of the host protective antibody response and influences parasite-binding tropism for different blood vessels.

The Smith Lab is interested in understanding the molecular mechanisms governing parasite-vessel wall interactions. We investigate the structure and function of PfEMP1 proteins and host receptor interactions associated with severe malaria. We recently identified a distinct subset of PfEMP1 proteins that binds to brain endothelial cells using a host receptor called endothelial protein C receptor (EPCR). As EPCR plays a key role in regulating blood clotting and inflammation in blood vessels, our work suggests there are important linkages between IE cytoadhesion and vascular disease complications associated with severe malaria. We use a combination of laboratory and field-based studies in Africa and India to better understand malaria disease pathogenesis and to design disease interventions.

The goal of this project is to advance our understanding of malaria disease mechanisms and aid in the development of interventions to treat severe malaria. We are taking a multi-pronged approach that involves both laboratory and field-based research studies. Our lab has pioneered novel approaches to broadly interrogate PfEMP1 function in a repertoire-wide manner. We are also working with collaborators at the University of Washington Department of Bioengineering to develop better in vitro endothelial models to study parasite-host vessel wall interactions and characterize malaria vascular disease mechanisms. As part of our field-based research efforts, we belong to an International Centers of Excellence for Malaria Research (ICEMR) team based in India (PI, Pradip Rathod, University of Washington) where we are investigating the role of PfEMP1 proteins in severe malaria.

In this study, we showed that a distinct subset of parasites is selected on human brain endothelial cells and characterized the parasite ligands mediating cerebral binding. This finding gives important clues into a deadly parasite binding phenotype and could help explain why some malaria infections result in more severe complications than others. It also suggests new targets for anti-disease interventions. 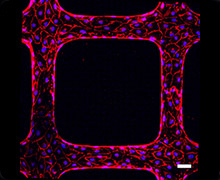 The goal of this project is to understand signaling processes related to microvascular dysfunction and to develop new therapeutic approaches for intervening in inflammation-related damage to blood vessels. Endothelial cells cover the inner wall of blood vessels. Endothelial activation and dysfunction are hallmarks of pathological microvascular vascular environments of inflammation-related diseases, such as P. falciparum malaria, bacterial sepsis, and viral hemorrhagic fever. Our lab is studying the host signaling mechanisms that lead to blood vessel damage and has pioneered novel in vitro blood-brain barrier models to investigate mechanisms of dysfunction associated with cerebral malaria. For these studies, we are collaborating with the Kaushansky lab at the Center for Global Infectious Diseases to investigate mechanisms of microvascular dysfunction and signaling pathways to restore microvascular function. We are working in collaboration with Dr. Ying Zheng at University of  Washington on novel 3D microvessel models to investigate the malaria parasite and vessel interaction and link this research to clinical investigations of malaria disease with our research partners in Africa and India.

Dr. Smith is interested in partnerships that can translate his laboratory’s findings about P. falciparum interactions with host endothelial proteins adjunct treatments for severe malaria and new approaches to treat vascular dysfunction from infectious or non-infectious disease. Learn more about partnering with Dr. Smith. 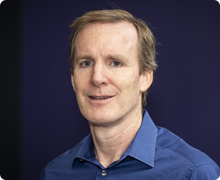 Joe Smith, PhD is a professor at the Center for Global Infectious Disease Research. He joined the center in 2002 to advance the mission to combat malaria through scientific discovery. Smith received his PhD in immunology from Washington University in St. Louis. He performed post-doctoral research in the Laboratory of Parasitic Diseases at the National Institute of Allergy and Infectious Diseases, National Institutes of Health, under the guidance of Dr. Louis H. Miller. Smith holds an affiliate faculty position in the Department of Global Health at the University of Washington.