Our research interest is to understand signaling events and gene regulation that are critical for disease pathogenesis of Group B Streptococcus and Staphylococcus aureus. 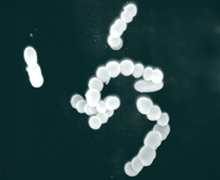 Group B Streptococcus (GBS) are commonly found in the recto-vaginal tract of healthy women but can cause severe invasive disease in human newborns and adults - including elderly, immunocompromised and diabetic individuals. GBS disease commonly manifests as pneumonia, sepsis and meningitis. Our studies on GBS are focused on understanding how these bacteria adapt to the environmental niches encountered during their life cycle. Studies from our research have shown that GBS encodes signaling factors such as a serine/threonine kinase; these proteins were previously thought only to exist in higher forms such as eukaryotic organisms. Our research showed that the kinase regulates the expression of the GBS toxin known as hemolysin/cytolysin and also enables the bacteria to adapt to nutrient starvation. We have demonstrated that the kinase affects toxin expression based upon its interaction with a DNA-binding response regulator known as CovR. The interaction between the kinase and CovR represents novel findings in bacterial environmental adaptation. More recently, we have shown that GBS mutants defective for CovR signaling show increased blood-brain barrier penetration and thus provide insight into how the organism can transition from a commensal organism to a virulent, meningeal pathogen. Current research is focused on identifying the environmental cues/signals that are sensed by these bacteria for regulation of toxins and understanding how the pathogen migrates through different host cells during infections. 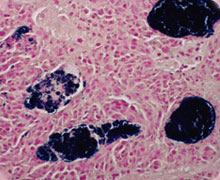 Like GBS, S. aureus are also Gram-positive bacteria that can cause severe invasive disease in humans. Infections due to S. aureus include deep-seated infections such as bacteremia, sepsis, pneumonia, ostemolyelitis and toxic shock syndrome. In the U.S., infections caused by methicillin-resistant strains of S. aureus (MRSA) have even surpassed numbers linked to HIV/AIDS. We have recently identified a number of novel genes/signaling factors that regulate antibiotic resistance, toxin expression and S. aureus virulence. Current studies are focused on elucidating how these signaling factors affect antibiotic resistance and S. aureus infections such as sepsis and pneumonia. We are also investigating how mutations in host signaling pathways affect disease susceptibility to S. aureus. This is particularly relevant as patients with genetic disorders such as Jobs syndrome and chronic granulomatous disease (CGD) are prone to recurrent and life-threatening infections due to S. aureus. The ultimate goal is to use the information gathered from our research to identify novel compounds that can be used to treat these bacterial infections.

In July 2014, Rajagopal received a five-year, $2.4 million grant from the National Institutes of Health to study how the pigment/lipid toxin activates an immune response and causes host cell lysis. This will be valuable for the development of therapeutic strategies that prevent Group B streptococcal infections in humans.

Students interested in these areas of focus in the laboratory should contact Dr. Lakshmi Rajagopal to discuss current rotation projects.