Welcome to the Maga Lab

The Maga lab investigates the mechanisms (i.e., contributions of genes and environmental factors) responsible for human malformations, specifically craniofacial disorders, and normal phenotypic variation. The lab is currently unraveling the epigenetic changes – changes in the genome due to environmental factors as opposed to mutations – that contribute to fetal alcohol spectrum disorders (FASD).

Researchers know that drinking alcohol during pregnancy can trigger a wide range of these disorders. Among these, fetal alcohol syndrome (FAS) is a very specific category and is diagnosed typically by growth retardation, craniofacial malformations, central nervous system impairment and low head circumference percentile. But not every individual exposed to alcohol during gestation gets full-blown FAS. The reasons for these variable outcomes remain elusive. There are simply too many factors to isolate such as the amount of alcohol consumed, when and how long it is consumed, the influence of maternal age, health and the inherent genetic variation in humans.

Dr. Murat Maga and his colleagues in Seattle Children's Center for Craniofacial Research are investigating these issues, with the ultimate goal of improving FASD diagnosis and prevention.

Maga's studies offer realistic insights by mimicking how a woman might consume alcohol before she evens knows she's pregnant. The lab uses 3-D imaging technologies and shape-analysis software to quantify the changes in phenotype, or physical characteristics, that occur in mouse embryos when their mothers regularly ingest small amounts of ethanol. This helps Maga and his colleagues pinpoint which craniofacial changes occur when a mouse is exposed to a particular amount of ethanol at a particular point during gestation.

Animal models play an important role in these studies because they give the researchers the ability to strictly control environmental stimuli. Inbred mice have an additional advantage because the effects of genetic variation are minimized. Therefore, any significant change in the face or the head of the animal can be directly attributed to the effect of alcohol during pregnancy.

Pinpointing the genes that contribute to fetal alcohol syndrome

The lab is working to correlate the craniofacial variations seen in mice with particular genes and genetic changes. This helps Maga's team understand how alcohol exposure causes epigenetic changes that contribute to FASD and other health problems. Maga and his colleagues identified some of these changes in a paper in PLoS Genetics, a key step toward unraveling alcohol exposure's impact.

Because craniofacial malformations are one of FAS's key indicators, understanding how these malformations occur will lay the foundation for a broader understanding of the mechanisms that drive FASD. This could set the stage for tests that help doctors diagnose the syndrome and new educational programs that prevent it by teaching women more about how alcohol consumption impacts the fetus. 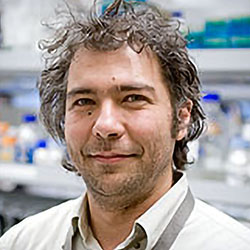 Murat Maga, PhD, is an assistant professor in the Department of Pediatrics at the University of Washington School of Medicine and a member of the Seattle Children's Research Institute's Center for Developmental Biology and Regenerative Medicine. Dr. Maga is investigating the role of environmental (epigenetic) programming in the presentation of alcohol-related malformations, specifically in the development of face and head. He is also researching how genomic differences correlate with these features to find epigenetically modified genes responsible for the differences.

View a complete list of Maga's publications on PubMed.