Welcome to the Vitanza Lab

The goal of the Vitanza Lab is to find new treatments that are both safe and curative for high-grade, aggressive pediatric brain and spinal cord tumors, such as diffuse intrinsic pontine glioma (DIPG), diffuse midline glioma H3 K27M-mutant (DMG) and atypical teratoid rhabdoid tumor (ATRT). Our lab generates treatment-naïve patient-derived models for our own studies and to share with the international research community. We use these models to evaluate targeted therapies, particularly epigenetic and immunotherapeutic, and optimize these therapies so that they can be translated to clinical trials for affected children and young adults. While we have already introduced innovative approaches, such as intracranial CAR T-cell trials, we believe that the fastest way to cure fatal diseases such as DIPG will be to have an intensely collaborative community that focuses on patients first.

Our research focuses on an integrated approach to DIPG and DMG in the clinic, in the lab and through development of new clinical trials. 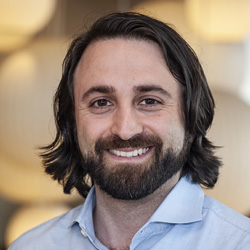 Dr. Nicholas Vitanza is a pediatric neuro-oncologist and translational scientist whose career is dedicated to the care of children with CNS tumors such as DIPG or DMG. During his oncology fellowship with Drs. Bill Carroll and Elizabeth Raetz at New York University, laboratory projects led to a COG clinical trial and an ASPHO’s Young Investigator Early Career award. He completed a second fellowship in pediatric neuro-oncology at Stanford University, followed by a post-doc in Michelle Monje’s neuroscience/DIPG Lab, in which he performed high-throughput drug screens in patient-derived DIPG models and mechanistic analyses of epigenetic vulnerabilities in DIPG. This work led to publications in Cancer Cell and Science Translational Medicine, as well as the preclinical foundation for a phase 1 clinical trial for which he is a co-principal investigator.

His goal is to better understand vulnerabilities in DIPG/DMG, to develop combinatorial CAR T-cell treatment and ultimately to translate scientific discovery into improved outcomes for affected children.

If you would like to donate to the Vitanza Lab, please choose “Other” and type in “Vitanza Lab” when asked where you want your gift to go. Donate today.

Who We Work With

We believe that the fastest way to cure fatal diseases such as DIPG is to have an intensely collaborative community that focuses on patients first. We collaborate with top researchers around the world to help move science forward, toward effective treatments and cures of aggressive pediatric brain and spinal cord tumors.