What is velopharyngeal dysfunction? 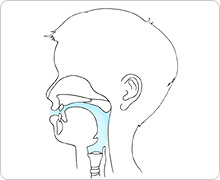 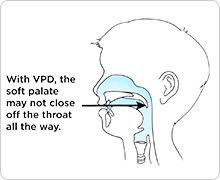 Speech with VPD: An open soft palate lets air flow through the nose and mouth (shown in blue).

In velopharyngeal dysfunction (VPD), parts of the throat and roof of the mouth do not work right during speech.

For many sounds during normal speech, the palate rises to touch the back of the throat and sends all of the air out of the mouth.

When a child has VPD, their soft palate does not always contact their throat when they talk. This lets air escape through their nose during speech.

If VPD is severe, it may be hard to understand your child’s speech.

What are the different types of VPD?

Determining the specific type of VPD your child has is very important so we can recommend the right treatment. There are 3 types.

Most families have not heard of velopharyngeal dysfunction before their child is diagnosed with it. Seattle Children’s has a great deal of experience treating VPD. Our Childhood Communication Center has a clinic focused on VPD. Each year our Craniofacial Center cares for more than 1,000 children with cleft palate, which increases the chance of having VPD.

Symptoms vary depending on the type of VPD your child has.

Before we develop a treatment plan, we determine what type of VPD your child has. We also check for other issues that affect speech.

Your child may have trouble with:

Your child may need 1, 2 or 3 appointments to complete an evaluation for VPD. Before someone calls to schedule, an SLP specializing in VPD will determine which appointments your child may need. After the tests, we will talk to you about treatment options. Learn more about what to expect at a VPD Clinic visit.

Our goal is to eliminate VPD as early as possible. This helps your child develop normal speech patterns.

At your first appointment, we determine which kind of VPD your child has. The 3 types of VPD have different treatments:

Our VPD Clinic is part of the Childhood Communication Center. Call 206-987-3853 for an appointment or more information.

For questions about cleft palate care, contact the Craniofacial Center at 206-987-2208.

Who Treats This at Seattle Children's?