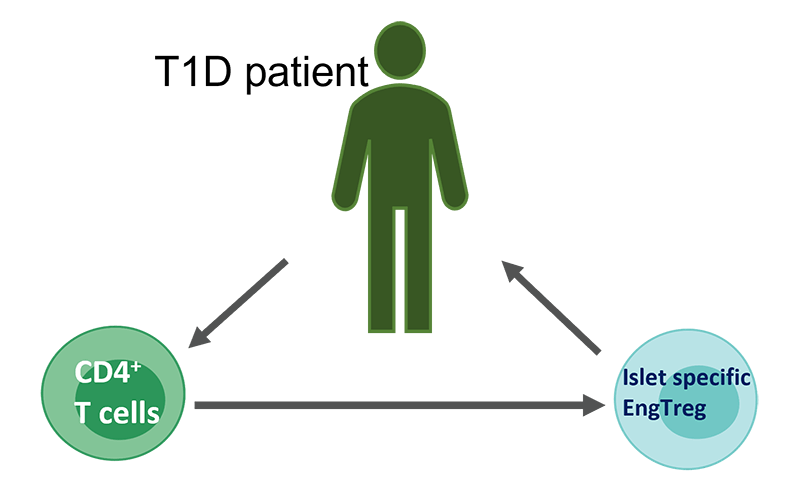 Years before someone is diagnosed with type 1 diabetes, their pancreas undergoes changes like the earliest sparks of a forest fire. Their blood sugar levels aren’t yet abnormal — no clear signals of danger — but the pancreatic cells (islet) are inflamed like smoldering coals, the beginnings of the autoimmune response that eventually causes diabetes. But researchers at Seattle Children’s Research Institute believe they’ve found a way to possibly extinguish such fires and keep them from re-igniting, leading to a cure or very long-term protection from diabetes.

Dr. David Rawlings, director of the Center for Immunity and Immunotherapy at Seattle Children’s, and Dr. Jane Buckner, president of Benaroya Research Institute, and colleagues have made significant advances in developing a T-cell therapy to treat type 1 diabetes. Their findings, published in Science Translational Medicine, outline an approach to engineer regulatory T cells (Tregs) to stop the immune cell attack on the pancreas that causes type 1 diabetes.

Rawlings, who is also a professor in the departments of Pediatrics and Immunology at the University of Washington School of Medicine, has collaborated with Buckner for more than a decade in working to understand the immunology of diabetes. First, they developed gene-editing to manufacture human Tregs, an important step for overcoming challenges with purifying and expanding Tregs from blood for clinical production. This earlier published work also showed the engineered Tregs (EngTregs) were functional, suppressing the immune response in pre-clinical models of inflammatory diseases.

The most recent advance involved making the EngTregs specific to the pancreas, so the cells would go to the pancreas and suppress the autoimmune response that causes type 1 diabetes. To do this, the researchers used their knowledge of T-cell receptors, proteins on the T-cell surface that determine the cells’ target. Combining gene editing with gene transfer of T-cell receptors, they generated EngTregs that specifically target islet cells within the pancreas.

“We know that in order for regulatory T cells to be beneficial for a tissue-specific disorder like type 1 diabetes, they need to recognize the tissue that's being injured,” Rawlings said. “So the big progress here is adding the targeting to the EngTregs so they can turn off those cells that are being trained to target the injured tissue.

“They can come to this area where the fire is burning and they can turn off the whole fire, as opposed to just turning off one of those cells that's damaging the tissue. And that's a feature of these regulatory cells called bystander suppression. In our study, we show that we can make antigen-specific EngTreg that can achieve this critical bystander suppression,” he said.

“This research leverages our background in gene editing to establish a new cell therapy for the treatment or prevention of type 1 diabetes and other organ-specific autoimmune and inflammatory disorders, such as rheumatoid arthritis and multiple sclerosis,” Rawlings said. “We hope that someday this therapy could become a groundbreaking treatment.”

In addition to being co-corresponding authors on this paper, Rawlings and Buckner are scientific co-founders of biotechnology start-up GentiBio, a Seattle Children’s Research Institute spin-out, and the research institute and Benaroya Research Institute also hold several joint patents.

Following the findings of this paper, Rawlings and his team optimized their methods of generating and expanding populations of antigen-specific EngTregs for use in clinical trials. Their major advances in this effort were presented in a plenary abstract at the last international meeting of the American Society for Cell and Gene Therapy.

“We use a new dual-editing method that simultaneously turns engineered T cells into Tregs, delivers the islet-specific T-cell receptor and also provides a special growth signal,” Rawlings said. “This growth signal not only allows us to manufacture engineered cells at very high purity, but also to give these cells an advantage when transferred into a patient. No other current technology does anything like this.”

The research was supported by a grant from the Helmsley Charitable Trust, GentiBio, Inc., Seattle Children’s Research Institute’s Program for Cell and Gene Therapy, the Children’s Guild Association Endowed Chair in Pediatric Immunology, and the Hansen Investigator in Pediatric Innovation Endowment.