Out of Mosquitoes and Into Petri Dishes: New Production Platform Accelerates Malaria Vaccine

Efforts to create an effective whole cell malaria vaccine that can be produced in large amounts have taken a leap forward, thanks to contributions from Seattle Children’s Research Institute, collaborating with biotechnology company Sanaria. Together, they have created a new manufacturing platform that can produce abundant vaccine in a cell culture platform, reducing production cost, an important factor for the resource-poor countries where malaria is rampant.

Dr. Stefan Kappe, principal investigator in the Center for Global Infectious Disease Research and professor of pediatrics at the University of Washington School of Medicine, used genetic engineering strategies to weaken the malaria parasite and applied this technique to generate parasite vaccine strains that can be safely used in humans; his laboratory team are global leaders in these techniques.  The new vaccine production platform is ideally suited to generate large amounts of their highly complex whole parasite vaccine strains. 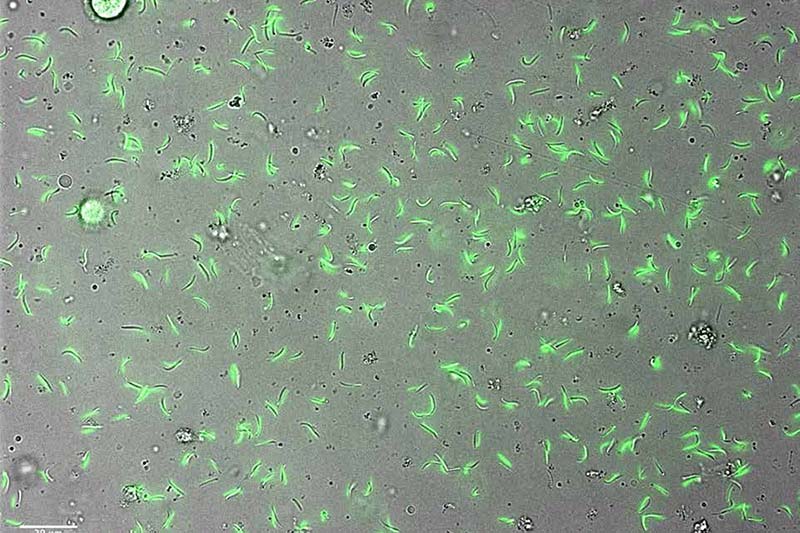 The deadliest form of malaria is caused by Plasmodium falciparum parasites transmitted by mosquitoes. The parasite grows in the mosquito, colonizes in the salivary glands, and then gets transmitted by bite to humans, where it asymptomatically infects the liver, replicates, merges into the bloodstream and infects red blood cells, causing disease and more than half a million deaths each year.

There are currently two approaches to malaria vaccine development. One is a subunit approach, where individual proteins —the parasite has about 5,500 of them — are expressed in a recombinant system. RTS,S, the only approved malaria vaccine, is based on a single protein and offers 20% to 30% protection against the disease.

Kappe and colleagues consider the subunit method in its current form of limited use for malaria vaccination. They are pursuing a live attenuated approach, using the whole organism as a vaccine. To ensure that it doesn't cause disease on its own, Kappe’s lab has worked for 15 years to weaken the parasite through gene editing. These weakened parasite strains can infect the liver and partially replicate but cannot get out into the bloodstream to cause disease. “I like to say that they can check in but they can’t check out,” Kappe said.  The researchers believe live vaccines of this kind will produce better defense because they stimulate broader and more potent immune responses, as shown in animal studies.

Sanaria is the only company in the world able to manufacture these live attenuated vaccines by raising sterile mosquitoes, extracting, purifying and preserving the parasite, and readying it for injection. Clinical trials in Europe and the United States of a mosquito-extracted live vaccine weakened by radiation showed up to 100% efficacy against infection from laboratory strains of malaria parasites. However, scalability is an issue with this manufacturing method.

“It's good to have a great vaccine, but if you can't make enough of it and if you can't vaccinate enough people, then its impact will be limited, as we saw with the COVID-19 vaccines in resource-poor areas of the world,” Kappe said.

Recently published findings in Nature describe Sanaria’s alternative manufacturing platform for these vaccines: The parasites are grown in vitro — in a culture dish or bioreactor — instead of in mosquitoes. The Kappe Lab analyzed the gene expression of the in-vitro parasites and found them biologically similar to the ones grown in mosquitoes.

“The genetic engineering platform we developed at Seattle Children's to make live attenuated vaccine strains and Sanaria’s ability to manufacture these strains in the in vitro manufacturing platform will make it possible to bring the most protective vaccines to billions of people,” Kappe said. “The pieces of the puzzle are coming together. This will allow us for the first time to envision a vaccine that can ultimately help eradicate malaria.”

In previously published findings, Kappe and his team showed that a first-generation genetically engineered parasite vaccine strain gave 50% protection. In unpublished findings, data from a vaccine trial in the Netherlands using one of the second-generation live strains designed by Kappe’s lab showed 90% efficacy against malaria infection. Future trials in the U.S. and Europe will help establish dosing and further evaluate safety and efficacy before funding is secured for trials that will be done in malaria-endemic areas in Africa.

Kappe and Sanaria envision a study of women of childbearing potential, possibly in Mali, offering vaccination before the rainy season brings a huge uptick in malaria transmission. The vaccinated women would be compared to a placebo group.

“It's a critical trial because pregnant women and the babies they carry are one of the most susceptible populations that suffer from malaria,” Kappe said. “When an infected woman becomes pregnant, the parasite accumulates in the placenta and impedes or prevents proper fetal development, leading to stillbirths, miscarriages, low birth weight, cognitive impairment and more.

“An equally important population to vaccinate is young children. Malaria kills mostly young children between the ages of 6 months and 5 years. But we need to start vaccinating adults first, show a good safety profile, and then we can go into children,” he said.

Kappe said he is thrilled and energized by the new manufacturing capabilities. “We are cautiously confident that we’ll have a robust, protective vaccine on the market in five years,” he said. “This could be one of the most important contributions that Seattle Children's can make to the world to protect children. It's an exciting time.”

Gigliola Zanghi, a research scientist, and Robert Morrison, a data scientist, both of the Center for Global Infectious Disease Research, contributed to the study.

This work was supported by the National Institute of Allergy and Infectious Diseases and by seed funds from Seattle Children’s Research Institute.

Interested in learning more about the global impact of malaria? Listen to a recent podcast featuring Dr. Kappe.