Harnessing a Virus to Cure Patients with Genetic Immune Diseases 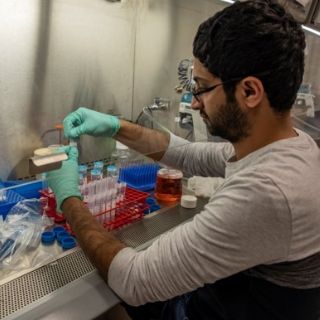 There are hundreds of Primary immunodeficiency diseases (PIDDs) caused by inheriting a single genetic defect (or “mutation”) in one of ~ 30,000 human genes. The mutations result in mild to severe defects in the immune system’s ability to fight bacterial, fungal, or viral pathogens. Because immune cells arise from stem cells located in the bone marrow, many PIDDs can be cured by transplanting patients with bone marrow stem cells from a healthy matched donor. However, not all patients have a matched donor. For these cases, our scientists are developing lentiviral gene therapies that could provide a back-up option for a cure. 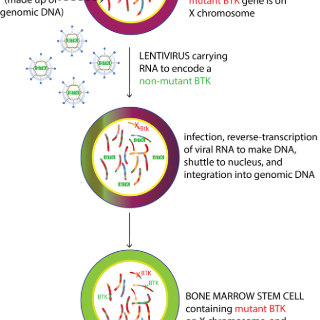 In lentiviral gene therapy, bone marrow stem cells are extracted from the patient, then taken to the lab where they are infected with the therapeutic lentivirus. Lentiviruses have the ability to integrate permanently into host DNA and can be engineered to include a corrective gene along with it. The result is the permanent addition of one or more copies of the corrective gene into the patients’ stem cells. The stem cells are then infused back into the patient, where they will engraft into the bone marrow and begin to make immune cells with the corrective protein, restoring immunity. We are a satellite site for a lentiviral gene therapy trial for X-linked severe combined immunodeficiency (X-SCID). We also plan to open trials for Wiskott-Aldrich syndrome (WAS; WAS gene mutation), X-linked agammaglobulinemia (XLA; BTK gene mutation), and X-linked hyper-IGM syndrome (X-HIGM; CD40L gene mutation) soon thereafter. Our researchers are building a pipeline of gene therapies that could eventually be used to treat hundreds of genetic immune disorders.

Our vision for the next generation of therapies for primary immunodeficiencies and other blood diseases is to insert corrective DNA directly into the mutant gene itself- a process called gene editing. This would allow us to use the cells’ existing methods of regulating when and where the gene is turned on and off. This vision is rapidly becoming a reality, with our scientists at the forefront of developing methods to efficiently “edit” immune cells with the use of designer nucleases such as CRISPR/Cas9. Our scientists are rapidly advancing technologies that we will one day use to precisely edit defective genes in a patient’s own hematopoietic stem cells, in order to cure devastating immunodeficiency diseases such as immunodysregulation polyendocrinopathy enteropathy X-linked (IPEX; FOXP3 gene mutation), X-linked hyper-IgM (X-HIGM; CD40L gene mutation), X-linked agammaglobulinemia (XLA; BTK gene mutation), Wiskott-Aldrich syndrome (WAS; WAS gene mutation), as well as hemoglobinopathies such as sickle cell disease and β-thalassemia (HBB gene mutations).

Center for Immunity and Immunotherapies

For questions or inquiries,
email: ciitadmin@seattlechildrens.org.