The Seattle Children’s Hospital Guild Association Board of Trustees presents this award each year at the Guild Association’s annual meeting to honor guilds or auxiliaries that have made exemplary contributions through the following:

Commitment to the mission of Seattle Children’s

If you have trouble submitting the online form below, you can download and mail in a hard-copy nomination form (PDF). 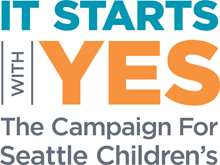