Craniofacial Center researchers are currently testing a new type of imaging system that promises to revolutionize the way we treat children and teens with craniofacial abnormalities. 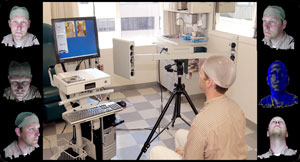 View a larger version
Outer images: Viewpoints and surface features available from a single 3-D image.
Center image: What the system looks like.

"Being able to gather accurate data about the facial characteristics for children with craniofacial differences will have tremendous impact on patient care," says Dr. Michael Cunningham, director of Seattle Children's Craniofacial Center.

"Now that we have the ability to quantify the specific craniofacial characteristics of a syndrome, we can link this data to genetic research in order to more fully understand causes and search for cures," say Heike.

Dr. Anne Hing is using this technology to quantify variations in head shape in children with craniosynostosis.

Recently acquired with a grant award from the Seattle Foundation, the new 3dMD system features several small cameras that capture multiple views of a child or teen's full face – from ear to ear and under the chin.

A powerful software system then merges the many viewpoints to produce a single 3-D image. The user-friendly system not only can capture the image of a squirming toddler within two milliseconds, but it also operates in standard clinic lighting conditions. The image can then be rotated on the computer in all axes.

In addition to better defining facial abnormalities for future links with genetic research, the Craniofacial Center plans to use the 3dMD system with clinic patients.

The system will allow clinicians to create 3-D images of patients' facial features to monitor conditions or post-operative healing processes over time.

Physicians and nursing staff members will also be able to use the 3-D images as teaching tools with colleagues and families.