A Dedication to Pediatric Research: The Man Behind the Largest Charitable Gift in Seattle Children’s History 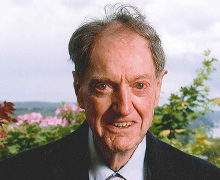 An understated, frugal and compassionate man, Jack MacDonald passed away in September of 2013 at the age of 98. He left behind a remarkable bequest – a $187.6 million charitable trust that was given to three organizations close to his heart: Seattle Children’s, the University of Washington School of Law and the Salvation Army.

MacDonald specifically designated his gift for pediatric research because he strongly supported our quest to find better treatments and cures for childhood disease worldwide. He recognized how important research has become to Seattle Children’s as a whole, and we couldn’t be more grateful for his foresight and generosity.

Learn more about Jack MacDonald and his incredible legacy.