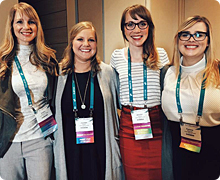 Taking a child’s temperature is a key part of monitoring their health in the hospital. But sticking a thermometer under a child’s tongue or arm can disrupt them while they rest or sleep. So a group of Seattle Children’s nurses wondered: Would it be better to use temporal artery thermometers, which only need a quick swipe across a child’s forehead?

Led by Esther Opersteny, these nurses recently finished a study that showed temporal thermometers are more precise and less disruptive than taking a child’s temperature orally or under the arm. Published in the Journal of Pediatric Nursing, the study spurred Seattle Children’s – and potentially other hospitals – to adopt temporal thermometers as the new standard of care.

“Using a different thermometer is a small thing but it can make a big difference in helping patients rest, so they can hopefully get out of the hospital faster,” Opersteny says.

The study followed 298 patients in Seattle Children’s surgical unit over an eight-month period. Oppersteny and her colleagues – including Hanna Anderson, Jourdan Bates, Jennifer Husby and Karissa Myking – were so committed to the research that they came in on their own time to gather data.

They took each participant’s temperature in their mouth, under their arm and with a temporal thermometer. When possible, the nurses also used a bladder reading to take each patient’s core temperature. The nurses found that temporal readings were more precise than oral or axillary readings.

“We took each child’s temperature twice with each thermometer, and the temporal readings were the closest together,” Opersteny says.

“The temporal thermometers were more sensitive to fevers, which helps detect them earlier and treat them as soon as possible,” Opersteny says.

An Innovative Way to Measure Disruption

The nurses also had to solve a key puzzle: How would they measure whether one thermometer was less disruptive than another?

This was easy enough with the children who could talk – the nurses just had to ask them and their caregivers which thermometer they preferred. But chronicling disruption was more difficult for infants and kids who were nonverbal. So the nurses developed an innovative scale.

“We couldn’t find a validated tool to use, so we had to create our own – it was a fun challenge,” Opersteny says.

“Patients and caregivers prefer the temporal thermometers because it’s one less interruption,” Opersteny says. “Nurses like them because the patients are more comfortable and, if they don’t need to be soothed, it gives us more time to help other kids.”

The study’s findings were so persuasive that Seattle Children’s has committed to installing temporal thermometers in all of its units. The nurses also presented their findings at the Society of Pediatric Nursing’s annual conference, potentially spurring other hospitals to make temporal thermometers the new standard of care.

“Being at the bedside means we see a lot of ways to improve care,” Opersteny says, “and we’re really grateful that Seattle Children’s embraces that and gives us a voice, so we can hopefully find new ways to help children lead happier, healthier lives.”