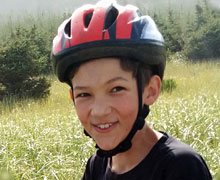 In late October 2017, I noticed something strange going on with my 12-year-old son’s eyes. For several nights during dinner when Roarke would look down at his plate and then lift his head to say something, I’d catch a glimpse of one of his eyes drifting toward his nose.

When our pediatrician couldn’t spot the very slight movement I had seen, I decided to take our son to see an ophthalmologist – just to quiet the voice in my head. After the usual intake, the nurse shined a small light into Roarke’s eyes over and over and over. Then the doctor came in and, without even greeting us, did the same thing with the light – over and over again. Finally, she stood up and told me that Roarke’s pupils weren’t responding to light in a normal way, and she strongly recommended we go straight to Seattle Children’s Hospital for an emergency MRI.

As you can imagine, I rushed there with Roarke, and my husband came straight from work. Sometime near midnight, a doctor from neurology pulled up an image on his computer and we immediately recognized our son’s profile. What didn’t belong in the picture was the quarter-sized mass in the center of his brain. It was pressing on his optic nerve and causing him to lose control of his eyes.

After I heard the news, I remember standing up and walking out into the hall. The next thing I knew, I was on the floor. Luckily, the neurologist had followed me and caught me as I fainted. (He told me later he knew how to spot a fainter and knowingly said I hadn’t been his first.) 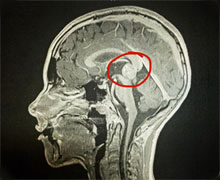 Brain cancer is the deadliest of all pediatric cancers, and there is no guidebook for parents. All I could do was feel a desperation that left me crying in elevators, screaming in my car and lying on bathroom floors frozen with fear.

The neurosurgeons told us they needed to biopsy the tumor so that they could identify the type and craft a treatment plan. That meant opening Roarke’s skull and cutting samples from the tumor in the center of the most important organ in his body. It also meant weighing the possibilities of the damage that might be done in the process of doing the biopsy.

We had no choice. Our son had a bomb in the middle of his brain and the neurosurgeons were our SWAT team. We signed the papers and watched them put a mask on his face and wheel him away. I wondered if that would be the last time I would see my precious boy whole. You can imagine the joy and gratitude we felt when Roarke showed no signs of impairment in the days following the surgery!

The tumor was diagnosed as a pure germ cell tumor – a growth that forms in the brain during fetal development after cells that should migrate to other parts of the body get trapped in the brain and multiply. We were incredibly relieved to hear that this type of tumor is very responsive to four months of chemotherapy and about 30 proton radiation treatments that target both the tumor and all four ventricles of the brain.

While we were grateful that our son’s life could be saved, this treatment would not come without a cost. The potential risks and side effects over Roarke’s lifetime left us heartbroken – and the journey to cure him would be painful. After his chemo port was inserted in his chest, Roarke dubbed it “the devil's doorbell.”

“Our son had a bomb in the middle of his brain and the neurosurgeons were our SWAT team.” 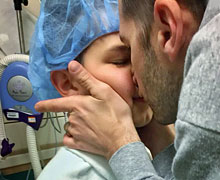 Within a few weeks of Roarke entering treatment, I applied for Seattle Children’s financial assistance at the urging of a social worker. We had health insurance through my husband’s work, but the deductibles were enormous and I knew that diagnoses like cancer can bankrupt families. We are a one-income family of five, and I remember telling a friend, “When the medical bills start rolling in, they can take it all. Our house, our car, all of it. We’ll live in a tent. I just want my boy to be OK.”

When we found out that Seattle Children’s Financial Assistance Program would pick up everything our insurance didn’t cover, all I could think about were the generous donors in our community who contribute to this fund. We were so thankful for all the people who step forward to help families like ours in the direst times of life.

Where gratitude and hope walk hand in hand 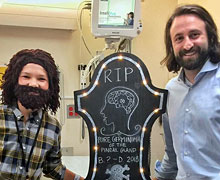 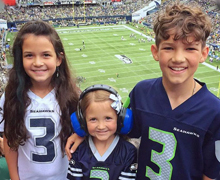 Thanks to Seattle Children’s, Roarke completed his treatment in April 2018, and today his brain shows no evidence of disease. Our son’s great outcome was the result of science, medicine, prayers, determination and the work of doctors and nurses – many of whom also have kids of their own.

We owe our son’s life to Seattle Children’s Hospital. And because of philanthropy, we were able to bring Roarke home to the stability we had before we gave up six months of our lives for cancer treatment.

Our family has a little saying about Roarke, now 14, who is doing great in school and is on the cross-country track team: “He may be scratched and dented, but he still runs good!” All joking aside, we do worry what the future holds for our son and all kids who have received chemotherapy and radiation. We know there are often physical debts to be paid as childhood cancer survivors grow into adulthood.

Our hope for better treatments and cures is strong. A million thanks to everyone who generously supports cancer research. We are forever grateful to you and the clinical teams who work tirelessly to improve cancer care for brave kids like Roarke.

“We know there are often physical debts to be paid as childhood cancer survivors grow into adulthood. Our hope for better treatments and cures is strong.”