We Say Yes to the Team That Saved Our Baby

When our son was born, he was given a horrifying 1% chance of survival. Today, Oliver is a 22-month-old who loves walking, talking, climbing and wrestling with his siblings. Seattle Children’s gave him that fighting chance.

Oliver was born seven weeks before his due date via an emergency C-section. When they cut the umbilical cord, he turned blue immediately. He struggled to breathe and the swelling in his body restricted his blood flow; the medical team told us his odds of survival were very low. They believed Seattle Children’s was his only hope, so our preemie baby traveled north from Tacoma, Washington, in an ambulance under lights and sirens.

The journey was just beginning 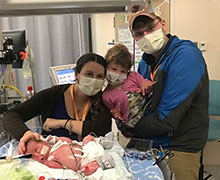 We knew Oliver’s early arrival was caused by complications in his lungs; once at Seattle Children’s, we learned the issues were the result of a mass in his left lung the size of an adult fist. Oliver was placed on a ventilator in the Neonatal Intensive Care Unit (NICU) so his care team could stabilize him and look for solutions.

On Oliver’s fifth day of life, we found out he would need immediate surgery to remove the lung mass. However, he couldn’t be taken to the operating room because the machines that were keeping him alive couldn’t be moved. So they brought the operating room to Oliver, with at least 15 carts of equipment and many people arriving to support a surgery right at his bedside. We understood the operation was a last-ditch effort, but without it he would suffocate.

Dr. Robert DiGeronimo, the medical director of the NICU, was a wonderful source of encouragement and support. He gave us updates and really helped us understand what was happening – in terms we could understand. We felt like we were a part of every decision about our son’s care. 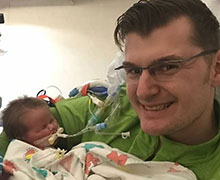 After surgeons removed the rare tumor, which measured 4 inches by 3 inches, Oliver started improving right away. Two days later, we finally got to hold our baby.  And his progress continued – within a week, he was taken off the ventilator and took his first breaths on his own!

When Oliver was 16 days old, less than two weeks after his surgery, his care team said it was safe to transport him back to our hospital in Tacoma. And our dream of taking Oliver home finally came true when he was 4 weeks old – still nearly three weeks before his expected due date.

“We wish we could write a thank-you card to every person who donates and makes care possible for families like ours.”

Our medical team truly cared – for all of us 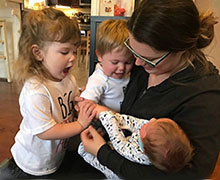 Looking back, we are struck by the way Seattle Children’s took care of all of us. When we first got there, they said, “You have the most important job right now, and we will work around you.” Even though they were saving our son, they knew we needed to have as much time with Oliver as we could.

Later on, Oliver’s big sister, Annabelle, was having a hard time not being able to see him as often as she wanted. So the Child Life team thoughtfully provided two polar bear stuffed animals – one for Oliver and one for Annabelle – and told her she was connected to her brother through the toy. Then they sent home pictures of him with the bear, and that helped make Oliver’s hospital stay real and explainable for our 3-year-old daughter.

The service and level of lifesaving care at Seattle Children’s simply can’t be matched. They take other hospitals’ most difficult cases – children like Oliver who are so sick that their very survival is at stake – and, in addition to caring for the child, they give each family the love and support they need to cope with the crisis.

Most importantly, even though Oliver faced dismal odds, they spared no resource to save his life. We are forever grateful.

Thank you for saying yes 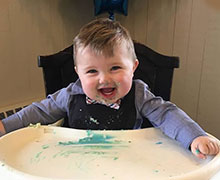 We know many people make financial sacrifices to support Seattle Children’s, and we wish we could write a thank-you card to every person who donates and makes care possible for families like ours. Your kindness will impact us for a lifetime – Oliver’s lifetime! – and we appreciate your generosity more than words can ever say.

An update on Oliver 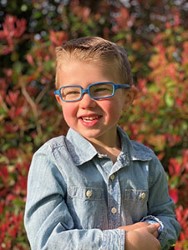 Today 5-year-old Oliver receives primary, pulmonary and neurology care close to home in Tacoma. Then each year, he returns to Seattle Children’s for surgical follow-up – his family sees it as a “one-stop shop” to review chest x-rays, airway function, nutrition and other developmental milestones.

Oliver continues to experience challenges related to his birth and the tumor that was removed, but he’s working through them with the support of his community. First and foremost, his family is with him every step of the way, teaching him about things like seizures and how to manage them. At preschool, he gets extra attention to stay on track with his learning and development. Oliver also works with occupational and physical therapists to build his muscle strength and tone. He has overcome many obstacles, despite the extra focus required for everyday tasks like tooth brushing and coloring – and the exhaustion of maintaining that focus.

Looking beyond his health needs, Oliver’s schedule is filled out by the activities he loves. He recently earned his yellow belt in Tae Kwon Do, enjoys building with Lego and is always happy to curl up on the couch with a good book. His parents also report that he is an excellent joke teller and loves making people laugh.