My Son Became My Hero: Our Family’s Cancer Journey 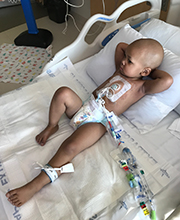 I will never forget the day my 17-month-son was diagnosed with stage 4 high-risk neuroblastoma.

Isaac had been lethargic with high fevers off and on for a month or two. We kept going back to our pediatrician, who told us to give him Tylenol, but the fevers always came back. After six or seven fevers, my wife, Kelli, and I said “We need to do more.” We knew this was not normal — something was wrong with our son.

After running blood tests and listening to Isaac’s abdomen, our pediatrician suggested he might have appendicitis and sent us to Seattle Children’s. Once we got there, doctors found a large mass — the size of a NERF football — crushing Isaac’s right kidney. Another blood test revealed Isaac had some kind of cancer.

The cancer was diagnosed as high-risk neuroblastoma. It had spread throughout his body — in the bones of his arms and legs and, of course, the big tumor in his abdomen. It was the absolute worst-case scenario.

My wife, Kelli, broke down when they told us. I’ll never forget hearing her screaming, crying. You never expect this to happen to your child.

I tried to remain positive, saying, “The first chapter in his book is just going to make his story that much more epic when he defeats cancer and we are blessed enough to walk out of here.”

A long road ahead

To say we were overwhelmed by the treatment plan laid out for us would be a gross understatement. It had three phases:

All in all, the treatment was expected to take 18 months. I remember thinking, “That is as long as he’s been alive. How are we going to be in this hospital for over a year? Are we supposed to stop working? How can we manage this?” 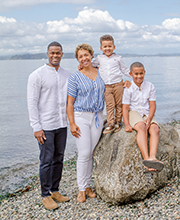 Throughout Isaac’s treatment, my first priority was happiness — making sure that Isaac was happy, laughing and being a kid around the hospital.

We played tennis in his patient room, blew bubbles and rode bikes down the hallway. We must have watched Moana a billion times. I remember one time, when Isaac was about 2 years old, Kelli put those green vomit bags on her hands and pretended to be a zombie, sending Isaac into a giggling fit as she chased us down the hall.

Child Life specialists would always bring Isaac his favorite toys – like cars, action figures and even video games. It was the best place on Earth for our kid to be, even in the hard times.

The darkest period of our story was after Isaac’s first stem cell transplant. His body had handled the previous treatments pretty well, but after the transplant, he really started to look like the “cancer kids” you see on commercials. He’d lost his hair and a lot of weight. He was emaciated, and you could see the veins in his head through his skin.

We were used to having this little kid with overflowing energy, but he became so weak he would hardly talk or move – and often fell asleep just sitting in his high chair. He was a shell of himself. He looked like a kid who was going to die. It killed me to see that.

Thankfully, Isaac recovered (with the help of many, many cups of milk!) and was able to continue his treatment, even finishing a few months earlier than expected.

Back to regularly-scheduled programming 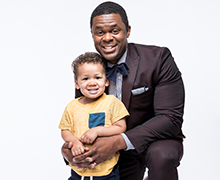 If you met Isaac today and didn’t know his story, you would never guess he had been so sick. He is a 52-pound brick — a super active 4-year-old who likes to wrestle with me and is learning to read. Once his treatment ended, he got right back to regularly-scheduled programming. He didn’t skip a beat!

I don’t ever think about cancer coming back for him, although I know it’s a possibility. If it does, we will go back into battle mode. We will fight it with everything we’ve got, knowing Seattle Children’s will be there for us.

Our care team – from the doctors to the nurses to the support staff – treated us like family, and I will never forget that. Without them, I don’t know how we would have gotten through this.

That’s why I say yes to Seattle Children’s.

“I can't wait to tell Isaac, when he's older, how amazing he is. Whenever I'm going through anything tough, I think of him. He’s my hero.”

An Update on Isaac 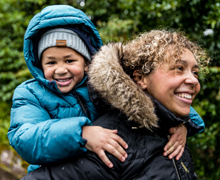 Isaac is a healthy, wild and fearless 5-year-old boy who is always on the go.

The soon-to-be kindergartner loves to swim, wrestle with his older brother, and play tennis, baseball and football. He has achieved every milestone for his age and is in the 98th percentile for height and weight.

Except for the “superhero scar” on his abdomen, you would never guess what Isaac has been through by looking at him. His scar marks the location where doctors removed a large cancerous tumor when he was a toddler.

His mom, Kelli, looks forward to watching Isaac grow and thrive. She is thankful every day for the respect, care and empathy shown by the entire care team at Seattle Children’s.

“There is no better place for neuroblastoma treatment,” she says. “They saved his life; it doesn’t get any better than that.”