I’ll never forget walking into an elevator at Seattle Children’s: my husband James was holding Emmy’s hand as a nurse was pushing Emmy, our once spunky 2-year-old, in a hospital bed. Me holding Parker, Emmy’s brand-new brother, just 7 weeks old. Someone pushed the button to the 8th floor Cancer and Blood Disorders Center - Inpatient for us and all I could think was how can this be possible? How can Emmy, our bright angel, have a deadly tumor wrapped around her spine? But it was possible, and it happened to us.

As we rode the elevator up to the floor that would become our second home, I wanted more than anything to wake up from this nightmare and never look back.

It all started in April 2015 when in the short span of just three weeks, our sweet girl went from saying, “Ow, my hip,” when she got into her car seat, to barely being able to walk. It happened that fast! Our pediatrician advised us to go to Seattle Children’s Emergency Department – the quickest way to confirm his suspicion that Emmy had rheumatoid arthritis.

Instead of inflamed joints, an MRI revealed high-risk neuroblastoma – a deadly cancerous tumor that was winding its way around Emmy’s spine. We soon learned that neuroblastoma is a form of cancer found mostly in children that forms when special nerve cells called neuroblasts “go haywire” during maturation and turn into a tumor instead of normally functioning nerve cells. As is often the case with neuroblastoma, there is a portion of the mass that spreads or branches off. In Emmy’s case, it reached toward her spine and was starting to enter the spinal canal, causing the pain that was our red flag that something was wrong.

That day, the bottom dropped out of our carefree world. On top of the sheer terror we felt when the doctor started saying words like “mass” and “tumor,” we were devastated to learn that the medical care required to save Emmy would quickly eat up the lifetime maximum of coverage she was allowed on my insurance plan. While I was still trying to process the fact that our little girl had cancer, I had no idea how we were going to afford Emmy’s treatment, let alone pay our mortgage, car payment or all our day-to-day bills. How were we going to do this? Would we need to sell our home? I knew we would do whatever was necessary to ensure our precious girl had the best treatment possible.

“Despite good health insurance, without Seattle Children’s financial assistance, we would have gone into debt and lost our home. To this day, I have zero idea how much Emmy’s treatment cost. We are forever grateful.”

My husband and I had already decided that I would take the year off to be with Emmy during her treatment when we had some incredible news: We found out we qualified for financial assistance from Seattle Children’s Uncompensated Care Fund! A team member from the Financial Assistance Program had come to visit us to check on our eligibility. At first, it didn’t look like we would qualify because both James and I had good jobs. But they didn’t give up easily and kept trying to figure out a way for us to meet the requirements, and that’s when I mentioned I was taking a leave from work to be with Emmy. They subtracted my income and we qualified! This is another day I will never forget. You can’t imagine the weight off our shoulders when we realized the fund would pick up anything our insurance wouldn’t – and that we could focus entirely on getting Emmy well.

In total, Emmy spent more than 200 nights at Seattle Children’s through more than 18 months of treatment, including three surgeries, five rounds of chemotherapy, 20 rounds of radiation, a stem cell transplant and a type of immunotherapy. And thanks to the Uncompensated Care Fund – and so many generous donors in our community who make this fund possible for families like ours – I was able to be by Emmy’s side every step of the way. Through it all, we never had to ask about cost when our care team recommended tests and treatments for our daughter. It was such a relief not to have to weigh finances against the possibility of a cure for Emmy. 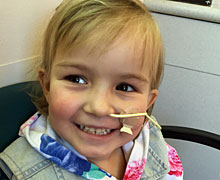 From day one, our doctors were amazing, including Dr. Julie Park, a world-renowned expert doing research that has improved survival rates for children with neuroblastoma. Also, Dr. Navin Pinto, the most warm and fuzzy oncologist ever, made us feel like Emmy was his only patient and that her fight with cancer was his fight, too. And our nurses were absolute heroes: advocating for us, praying with us, counseling us, playing with Emmy and scooping up baby Parker when we were overwhelmed. There were many times when we could barely stand on our own, and the incredible nurses at Seattle Children’s were always there to hold us up.

When I look back on Emmy’s cancer journey, I am sometimes surprised by how her determined spirit shined on through it all. In one home video, a very focused Emmy pushes her walker as fast as she can down a long hallway. I can be heard urging her to take it easy, and she yells back, “No!” I ask a second time. Again, a firm “no” from Emmy. Thanks to Seattle Children’s, our daughter will bring this won’t-back-down attitude to a world that will benefit from her strength.

I’m incredibly grateful to report that today there is no evidence of Emmy’s cancer recurring. She is an outgoing 5-year-old who will likely always love to be in charge!