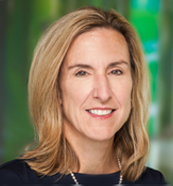 As the organization’s chief legal officer, Lisa Hayward’s role is to look out for the legal needs of the organization by providing advice and counsel through Seattle Children’s Board of Trustees, the senior executive team and other leaders and employees.

Hayward was drawn to this line of work while pursuing her master’s in health administration at Indiana University. One of her required classes covered legal issues in healthcare. She found it so fascinating that she ended up attending law school immediately after graduation. On her application essay to the University of Washington School of Law, where she earned her law degree, Hayward said her ultimate career goal was to serve as general counsel for a hospital or health system. She achieved that goal in 2016 when she was appointed Seattle Children’s general counsel.

At Seattle Children’s, Hayward combines her backgrounds in law and healthcare. Prior to graduate school she worked for several years as a technician in the pediatric cardiac catheterization laboratory at New England Medical Center, then at a private gastroenterology practice affiliated with Deaconess Medical Center in Boston. After graduating from law school, she joined the Seattle office of Davis Wright Tremaine, where she practiced for 18 years as a health lawyer, the last 11 as a partner of the firm.

Outside of work, you’ll rarely find Hayward sitting still. With two sons who play soccer, and as a passionate Seattle Sounders fan, she says she spends a ridiculous amount of time watching the sport. She and her family are also outdoor enthusiasts who unplug at their cabin near Lake Wenatchee skiing, scuba diving, river rafting, hiking, stand-up paddle boarding and cutting their own firewood.

“I tend not to think about my involvement in issues or matters as a source of satisfaction, but instead feel tremendous pride in supporting the amazing staff and faculty members at Seattle Children’s. Whenever I hear about our team members going above and beyond for our patients and families – which is often – I am grateful to serve in this supporting role.”