Using the Debley Lab’s rare existing resource of primary tracheobronchial AECs from well-characterized children and existing tracheobronchial AECs from adults, expertise in the conduct of mechanistic studies using differentiated AECs infected with respiratory viruses in the organotypic air-liquid interface model, and access to SCRI BSL3 facilities, we have embarked on projects to: (1) Determine whether tracheobronchial AEC expression of ACE-2 varies with age or pre-infection with human rhinovirus, and whether treatment of primary airway epithelial cells with angiotensin receptor blockers, ace inhibitors, or exogenous ACE-2, modulate SARS CoV2 infectivity and replication, (2) Determine if heterogeneity of airway epithelial interferon (type I and III) responses following SARS-CoV2 infection of primary airway epithelial cells from children and adults is associated with viral replication, and (3) Investigate the genetic regulation and function of interferon responses following SARS-CoV2 infection of airway epithelial cells from children and adults with atopic asthma.

Using airway epithelial cells from clinically well characterized asthmatic children, the Debley Lab will investigate the regulation of epithelial interferon responses to viral infection and the impacts of excessive or deficient epithelial interferon responses on incident viral triggered asthma exacerbation risk and lung function over time. The studies conducted in Dr. Debley’s Lab and unique resource of primary airway epithelial cells from clinically well characterized asthmatic children, provide an exceptional training environment for young investigators under Dr. Debley’s mentorship who are dedicated to pursuing a career in mechanistic patient-oriented research to learn translational research techniques to investigate the role of the airway epithelium in pediatric lung diseases and viral infection. 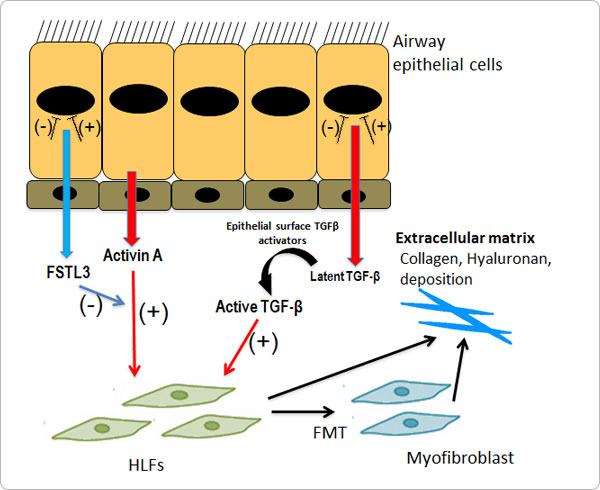 We are using BEC/fibroblast co-culture model systems with primary BECs from well-characterized asthmatic and healthy children to test our hypotheses that in normal airways a balance of epithelial-secreted stimulatory and inhibitory factors regulate fibroblasts and inhibit FMT, limiting extracellular matrix (ECM) deposition. Furthermore, we are testing our hypotheses that FMT, fibroblast proliferation and ECM expression, and BEC secretion of factors regulating fibroblasts, are associated with asthma severity, exacerbations, and/or lung function among the asthmatic BEC donors.

Epithelial control of responses to allergen challenge and viral exacerbation

The global hypothesis of this Center grant is that in the context of allergenic sensitization to aeroallergens, the airway epithelium serves as the central coordinator of responses to respiratory viral infection, leading to persistent asthma. Intrinsic differences between airway epithelial cells (AECs) from healthy and asthmatic individuals appear to play a critical role in the development of airway dysfunction. AECs from asthmatics respond in a different manner to infection by respiratory viruses than do AECs from healthy subjects. These differences are manifested during infection in several ways, including changes in the expression and deposition of extracellular matrix components and qualitative and quantitative differences in the expression of cytokines and chemokines. This altered response in asthmatic AECs may lead to changes in both innate and adaptive responses during infection, with increased infiltration of the airways with leukocytes. The primary goal of this Center is to identify and characterize these changes in pediatric and adult asthmatic AECs, and determine their effects on matrix formation and the innate and adaptive immune response.

In this U19 Center project we will investigate the role of AEC-derived TGFβ in regulating airway extracellular matrix (ECM) composition, including regulation of versican (VCAN) and hyaluronan (HA) accumulation and their degradation products in the airway ECM leading to increased adhesion and activation of inflammatory leukocytes. We hypothesize that viral infection and allergen exposure with the common of AECs from asthmatic as compared to healthy children induce human lung fibroblasts (HLFs) to produce an airway ECM enriched with VCAN, HA and their degradation products, leading to increased adhesion and activation of inflammatory leukocytes. Using human pediatric AEC and AEC/HLF co-cultures we will determine the effects of viral infection and aeroallergen exposure on asthmatic AEC regulation of HLF ECM production and composition.

This U19 Core will assist investigators of the Center test the hypothesis that the airway epithelium serves as a central coordinator of the responses to respiratory virus infection, and that sensitization to aeroallergens and intrinsic differences in AECs between asthmatic and healthy individuals is the critical link between exposure and the development of dysfunctional airway responses in asthma. At Seattle Children's Research Institute this Core will serve the Center by:

Investigating the Secretome of the Asthmatic Epithelium

In collaboration with Seattle Children's Research Institute's Dr. Richard James, we are investigating differences in airway epithelial cell proteomics signatures between cells from asthmatic and healthy children, at baseline and in response to viral infection.

Help us answer questions about childhood health and illness, and help other children in the future. See our current research studies.