COVID-19 Advisory: Only one primary caregiver per patient at all of our locations. Home Care Update. More information.

Neglected infectious diseases are a group of infections that are especially prevalent in low-income populations of the world. The Parsons Lab works to identify drug targets and drug candidates for such diseases including human African trypanosomiasis (also known as African sleeping sickness), leishmaniasis, and toxoplasmosis. There are no vaccines for these diseases. African sleeping sickness is a fatal disease, and treatment is complex and facing resistance. Leishmaniasis treatment is also difficult due to drug resistance. Toxoplasmosis affects persons with AIDS, causing dangerous encephalitis. These diseases are caused by single-celled parasites that are similar to the human host at the cellular and biochemical level, making treatment challenging. We are seeking to discover new ways to kill the parasites specifically without harming the human host.

Identifying Drug Targets and Drugs for African Trypanosomiasis and Leishmaniasis

We are currently studying a protein kinase of African trypanosomes as a candidate drug target. We have shown that it is essential to the parasite. As a proof of principle, we created parasites expressing a version of the kinase we engineered to be readily inhibited by a known compound and showed that chemical inhibition was rapidly toxic to the parasite both in vitro and in an infection model. This chemical genetic approach provided strong support for developing inhibitors to use to treat patients with the disease. We are now embarking on a project to develop such drugs that which should be helpful to both individual patients and in the fight to eliminate human African trypanosomiasis within the decade. We are expanding this work to examine the same protein kinase in Leishmania parasites, which infect 1.3 million people annually. We are using the same chemical genetic approach combined with CRISPR/Cas to test the role of the kinase in the form of the Leishmania parasite that causes human disease. We anticipate that we can leverage our work on inhibitors attacking African trypanosome to find inhibitors that kill Leishmania as well.

The Parsons Lab is part of a consortium project to identify new drugs to treat toxoplasmosis. The project aims to create new compounds that specifically inactive a Toxoplasma gondii enzyme called CDPK1. This enzyme is a protein kinase, which modifies and activates other proteins important for the parasite to invade host cells where it can multiply. The active site of CDPK1 is different from the active sites of human protein kinases, and thus it has been possible to develop molecules that block the parasite but do not harm human cells. This collaborative project includes biochemists, structural biologists, chemists, pharmacologists and parasitologists working together to accomplish our goals. 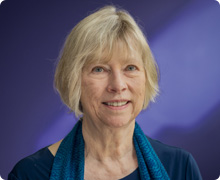 Marilyn Parsons, PhD, is professor at the Center for Global Infectious Disease Research. She received her PhD in genetics from Stanford University and conducted postdoctoral research in the Department of Biochemistry at the University of Washington. She is an affiliate professor of Global Health at the University of Washington, and has participated in numerous workshops in India and East Africa aimed at training young scientists to conduct research in infectious diseases. When not working, she enjoys her family, her standard poodles and her volunteer work in aid of women in need.