We study how cadherins and associated catenins participate in tissue morphogenesis during development and regeneration, and in the physiological maintenance of tissues and organs. Cadherins mediate dynamic cell interactions, and they actively transduce information across the cell membrane, in both directions. They transduce signals from the environment about the physical state of cells in tissues and mediate changes in gene expression via catenins. They also respond to intracellular signals to dynamically change their adhesive function to control the organization and mobility of cells in tissues as well as their physiological properties. Most of our work, described below, focuses on the classical cadherins, but we have also investigated the functions of protocadherins in developing embryos, about which much less is known. 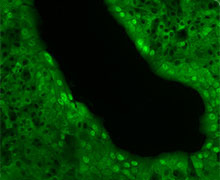 Nuclear localization of YAP depends on whether a cell is located on the edge or deeper within a cell colony; E-cadherin-dependent contacts cause YAP to be excluded from the nucleus.

We have studied many different roles of cadherins in signaling, including regulation of the Wnt-β-catenin pathway and signaling by growth factor receptors. Recently we have turned our attention to contact inhibition of cell proliferation, which regulates the growth of tissues and prevents dysplastic growth in cancer. Contact inhibition is a highly regulated process, since growth can occur in rapidly developing tissues despite extensive cell contacts, while the growth of tumors is characterized by a loss of contact inhibition.

We discovered that E-cadherin mediates contact inhibition of proliferation by stimulation of the Hippo signaling pathway, which is a pathway implicated in organ size control. The Hippo signaling pathway acts by modulating of the phosphorylation and nuclear localization of the YAP transcriptional regulator by a conserved kinase cascade. E-cadherin stimulates Hippo signaling and YAP nuclear exclusion via several membrane associated proteins. Cadherin and contact mediated regulation of Hippo signaling allow cells to differ due to their physical positions in a tissue; cells on the edge of a colony have higher nuclear activity of YAP than cells deeper within (figure 1), and this may similarly occur at edges of wounds, tumors, or other tissue boundaries in vivo. We are investigating the molecular mechanism linking E-cadherin engagement to the Hippo pathway and the specific roles of cadherin-hippo-mediated signaling in the control of cell proliferation and tumor growth in vivo using genetic manipulations in animal models.

Contact inhibition of growth is often overcome by mitogenic growth factor signaling, and we’ve identified an important mechanism for antagonism between them. Mitogenic growth factors, such as Epidermal growth factor (EGF) or lysophosphatidic acid (LPA), inhibit the Hippo pathway and trigger the rapid translocation of YAP into the nucleus, which depends on inhibition of Lats, the terminal kinase in the Hippo pathway. They do so through activation of PI3-kinase (PI3K) and phosphoinositide-dependent kinase (PDK1), but independent of their well-known target kinase, AKT; PDK1 seems to act via direct association with the core Hippo pathway-kinase complex. This novel connection between PI3K signaling and the Hippo pathway may be general, as it also seems to mediate the nuclear accumulation of YAP in response to cell spreading on fibronectin and integrin signaling. These findings suggest that an important activity of mitogenic signaling pathways is to inactivate the growth-inhibitory Hippo pathway, and they provide a mechanism for integrating contact inhibition and growth factor action. We are investigating the detailed molecular mechanism underlying this regulation as well as determining its role of in the control of cell proliferation and tumor growth in vivo.

Regulation of Cadherin-Mediated Adhesion in Tissue Morphogenesis, Cancer and Inflammation 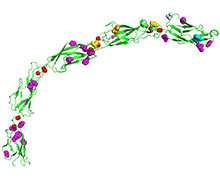 Structure of the E-cadherin ectodomain and location of naturally occurring mutations that affect activation.

We discovered many years ago that cadherin adhesive function is regulated of at the cell surface to mediate dynamic changes in cell interactions during embryonic morphogenesis; blocking dynamic regulation while maintaining strong adhesion inhibits elongation of the embryo.

More recent findings from my laboratory provide important new insights into the mechanisms of cadherin regulation. The adhesive activity of E-cadherin the cell surface of epithelial cells is regulated, independent of any changes in levels of expression or amounts of associated catenins; adhesive binding affinity appears to be regulated allosterically. The inactive and active states of E-cadherin at the cell surface can be distinguished using a unique set of monoclonal antibodies (mAbs) and by biophysical measurements of binding affinity. Another set of mAbs binds E-cadherin and strongly activates adhesion. Both types of mAbs recognize specific conformational epitopes at different interfaces between extracellular cadherin repeat domains (ECs), especially near calcium-binding sites. Moreover, mutations in cadherins associated with cancer or birth defects (figure 2) seem to affect this allosteric activation in interesting ways. The phosphorylation of p120-catenin and the integrity of microtubules control the activity of E-cadherin at the surface. Thus, physiological regulation of the adhesive state of E-cadherin involves changes across the cell membrane that cause changes in the EC interface regions and the binding properties of the ectodomain.

We hypothesize that regulation of the adhesive homophilic bond itself is a key event in cell junction regulation, allowing the catenin-associated cytoskeleton to pull the junctions apart once the adhesive bond is broken, and that this mechanism plays a role in morphogenetic cell movements as well as the physiological control of cell junctions in tissues. This has important implications for cancer metastasis and for barrier regulation in both epithelia and endothelia during inflammatory processes. We are working to understand in greater depth the mechanisms by which cadherins are regulated at the cell surface. We’re also using insights and tools we’ve developed to investigate the role of E-cadherin activity state in the regulation of physiological and pathological processes in vivo, including tumor metastasis and epithelial barrier function during inflammatory processes.