Do You See What I See? When Families and Providers Disagree 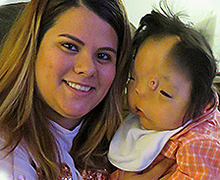 Ashley Guzman cuddles with her 2-year-old son, Jahaziel, in their home in Federal Way, Washington.

It took Ashley Guzman, and her husband Pablo, 2½ years to conceive their first child. When Guzman learned she was pregnant, she was overjoyed. But their journey through parenthood was far different from what they had imagined.

Concerns started mounting 14 weeks into the pregnancy when an ultrasound revealed the baby’s brain and skull were developing abnormally.

“I was in shock,” Guzman says. “I didn’t want to believe it. I prayed and prayed that the doctors were wrong.”

When she was 20 weeks pregnant, Guzman’s doctors in Auburn, Washington, advised her to terminate the pregnancy, but she and her husband refused. 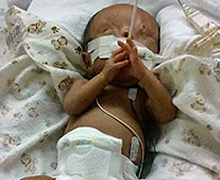 Jahaziel at Mary Bridge Children’s Hospital, Tacoma, Washington, shortly after he was born

“I was scared to see how he would come out,” Guzman says. “When I first saw him, I didn’t want to believe it.”

Their son, Jahaziel, weighed just over two pounds at birth. He had hydrocephalus – a harmful build-up of cerebrospinal fluid in the ventricles of his brain – and microcephaly – where the brain does not fully develop, resulting in an abnormal head size. His eyes were displaced, he had no nose and his mouth had a highly arched palate.

Neurologists told Guzman that Jahaziel would have profound intellectual disabilities and severe cognitive impairments, and was unlikely to crawl or walk. They noted in his chart, “He will be severely delayed with a poor quality of life.”

Jahaziel was intubated, placed on a ventilator and brought to the neonatal intensive care unit (NICU) at Mary Bridge Children’s Hospital in Tacoma, Washington. Once there, providers repeatedly offered to withdraw life support, but the Guzmans refused. They were focused on their son’s survival.

“I said, ‘No, that is not going to happen. This is a life. You might be the professional, but this is my child,’” Guzman remembers.

Despite his many challenges, Jahaziel did well in the NICU and was strong enough to be taken off the ventilator when he was 2 months old. Unfortunately, he had no nasal passages to bring air to his lungs. Because babies are nasal breathers, he would require a tracheostomy – a hole surgeons make in the windpipe (trachea) – to breathe.

Jahaziel’s head was also growing bigger, making it hard for him to move. He would need a ventriculoperitoneal shunt, which would drain the excess cerebrospinal fluid from his brain.

Jahaziel’s doctors offered the Guzmans the choice between these many surgical interventions and comfort care.

The family decided to move forward with the surgeries, determined to fight for their son’s life.

“It was the hardest time of my life. They told me he would suffer throughout his life and suggested I take him off the ventilator and let him die in my arms,” Guzman says. “We knew there was no way we could do that. We wanted to leave it up to God.”

The minute this decision was made, the temperature in the NICU went up, says Dr. Jennifer Kett, a pediatric palliative care physician and co-chair of the Ethics Committee at Mary Bridge.

“People became really distressed about this case. It was all they could talk about. They commented on what they perceived to be his poor quality of life. They said things like, ‘This is unnatural,’ or ‘This is nature trying to take its course.’”

Jahaziel’s parents were not shielded from these opinions. “One nurse told us ‘Some people here don’t think he has a soul,’” remembers Guzman.

The situation is not rare

Disagreements over a child’s treatment options or course of care are not rare in pediatric medicine.

Decision-making in pediatrics can be more complicated than in adult care because the decision-maker is usually the parent or legal guardian, not the patient. In the United States, parents are given wide discretion in how they make decisions on behalf of their child, but there is a limit on their authority. Providers can intervene.

“We all carry around biases. We see people and we make snap judgments about them. For providers, it can be helpful to imagine scenarios as slightly changed to see if our feelings about a case change.

“For example, if Jahaziel had not had facial anomalies, would providers have been so concerned about putting in a shunt or a trach? I don’t know, but that exercise can be helpful in pointing out areas where providers might not be thinking logically.”

Leah Kroon, co-leader of Seattle Children’s nursing ethics program, understands that while providers approach cases with medical expertise and experience, parents might view the situation from a completely different paradigm based on their history, religion, culture and values.

When responding to a disagreeing parent, Kett believes providers should begin by listening. She says clinicians sometimes communicate to families in a one-directional way, but often it’s better for them to stop delivering information and, instead, try to better understand how the family arrived at their point of view.

“We often think, ‘If only we gave them more facts, they would see it our way,’” Kett says. “But that’s not how negotiation should work. You have to really listen and hear what’s important to the other party and see if you can find common ground.”

Letting parents share their story can build trust, Kett says. “It’s when families feel pressured that they stop trusting us and retreat. If we can give them time, parents will sometimes get the information they need and come around to our recommendation on their own.”

In complex, distressing cases, it can be difficult for providers to determine whether or not to override the parent’s preferred course of care. Two ethical and legal concepts can serve as guideposts: the best-interests standard and the harm principle.

Seema Shah, an ethics consultant at Seattle Children’s, argues the best-interests standard is a poor tool in these cases because it requires a value judgement and is vulnerable to personal bias and subjectivity.

Shah believes the harm principle is a more appropriate guide. If a parent is making a decision that is likely to cause harm to the child, and that harm is greater than the harm of going to the courts or Child Protective Services, then the provider should intervene.

The problem with the best-interests standard

“If we have a life-saving intervention for a child who is otherwise healthy, we believe that is in the best interest of the child. But for a parent, there may be reasons why they don’t agree.

“For example, if a child has life-threatening bleeding but the family is of the Jehovah’s Witness faith, we may have different opinions on what is in the child’s best interest. Even if emergency room doctors recognize that the child needs a blood transfusion to preserve their life on earth, the parent may believe that giving that child blood would eliminate the possibility of their eternal salvation. So, whose conceptual best interest wins out?”

“The floor is the harm principle and the ceiling is the best-interests standard,” Opel says. “Ideally, when we make decisions on behalf of children, we aim to do what is in their best interest: decisions that promote a long, safe, happy life. When parents and providers aren’t aligned on what the idea of the best life is, we revert to the floor, which means we will intervene if a parent’s decision puts their child at significant risk of serious harm.”

When to hold back 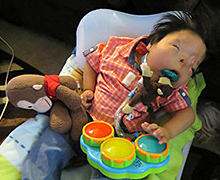 Jahaziel plays with his toys in his home, November 2017

Providers need to pick their battles, Kett says. When parents make a reasonable request, even if it’s not what the provider recommended, they should be supported.

“Clinicians are regularly wrong with our prognoses,” Kett says. “We need to have some humility about what we can and cannot predict. A lot of times parents are right, and we should recognize that.”

Opel advises providers to carefully examine the interventions they are pushing.

“Sometimes we make recommendations because it’s the standard of care, and there is a lot of good evidence for the effectiveness and safety of those recommendations,” Opel says. “But other times, there isn’t a lot of evidence for what we are recommending. In those situations, we have to acknowledge that there may be room for disagreement. We have to consider allowing the parents to make the decision, even if it’s not what we are accustomed to doing.”

Providers can experience moral distress when they think they know what is ethically right, but that course is not taken. Over time, this stress can build up to create what Kett calls “moral residue,” which can influence how providers care for future patients.

“During the periods in my career when I did not address moral distress, I was not as good a clinician,” Kett says. “I was closed-off, short-tempered, exhausted and unhappy in my work. It was more difficult to empathize with my patients.”

Kett wishes there had been more support for providers working on Jahaziel’s case.

“I think the nurses, doctors and others involved in this case were struggling. I think they were wrestling with intense issues about what is right and wrong, and what it means to have a good life.”

Kroon encourages staff and faculty members feeling overwhelmed by a case to take advantage of these resources. “We don’t want to have stuff bubbling underneath the surface that never gets resolved. That’s when people start to disengage. We want caregivers to stay connected to the reasons they entered their profession in the first place.”

Outcomes can be unpredictable 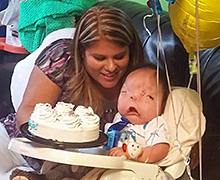 Since his surgeries, Guzman says Jahaziel has developed beyond his doctors’ expectations. After two months, he was able to breathe without a respirator and soon went home with his parents.

Providers predicted Jahaziel would not live past 1 year, but he is now 2 years old. He cannot crawl or walk, but he moves his legs and arms and plays with toys. He cannot speak, but he shakes his head, smiles when he hears his mom’s voice and waves to visitors. His head and face look different from other toddlers, but he has the same love for Curious George and Mickey Mouse.

Jahaziel still has a feeding tube and a tracheostomy, which require constant monitoring from a parent or from a nurse who comes to the family’s home for 16 hours each day to care for Jahaziel.

While Jahaziel’s health has dramatically altered their family life, Guzman does not regret fighting for her son’s life.

“He is different, but I love him just the way he is,” Guzman says. “He is my handsome boy. We’re going to give him the best life possible.”