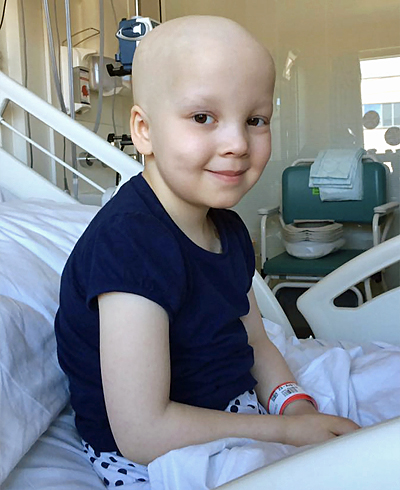 Erin Cross, 7, is one patient who experienced the power of T-cell immunotherapy after traveling to Seattle from her hometown of Chester, England, to receive the experimental therapy. Now, a year later, Erin is still in remission.

Seattle Children’s has opened the first chimeric antigen receptor (CAR) T-cell immunotherapy trial in the U.S. for children and young adults with relapsed or refractory CD19- and CD22-positive acute lymphoblastic leukemia (ALL) that will simultaneously attack two targets on cancer cells. With this more robust defense, researchers hope the new experimental therapy, first being investigated in the phase 1 Pediatric Leukemia Adoptive Therapy (PLAT-05) trial, will ultimately be able to cut the rate of relapse following CAR T-cell therapy by almost half.

“This is an exciting time where we’re at the forefront of advancing the CAR T-cell immunotherapy field by pioneering strategies to improve long-term outcomes for children and young adults,” said Dr. Rebecca Gardner, an oncologist at Seattle Children’s and lead investigator for the PLAT-05 trial. “In launching a bilateral attack on the cancer cells, we hope this trial will help us develop a T-cell therapy that leads to long-term remission for many more of our patients.”

Gardner and the research team, led by Dr. Mike Jensen at the Ben Towne Center for Childhood Cancer Research at Seattle Children’s Research Institute, are launching PLAT-05 based on what they learned from their previous CAR T-cell immunotherapy trials. In phase 1 of the ongoing PLAT-02 trial, which Gardner also leads, 93 percent of patients with relapsed or refractory ALL achieved complete initial remission. However, about 50 percent of those patients relapsed after the experimental therapy. With relapse presenting as a challenge in CAR T-cell trials across the country, Seattle Children’s researchers are dedicated to improving the therapy with the goal of long-term remission for all patients – and ultimately – a cure.

Researchers found that patients in the PLAT-02 trial relapse for one of two reasons – they lose persistence of their reprogrammed CAR T cells, or the leukemia evolves to circumvent the CAR T cells. While the PLAT-03 “T-cell booster” trial that Seattle Children’s opened in May aims to address the disappearance of the T cells, PLAT-05 may be the key to preventing the cancer from escaping the CAR T cells.

With the PLAT-05 trial, researchers will now be able to reprogram CAR T cells to detect and destroy leukemia cells by targeting both the CD19 and CD22 proteins upfront. If the cancer evolves to no longer express CD19, the CAR T cells can still attack the cancer through the identification of the CD22 protein. Researchers hope to enroll about 20 patients in the trial over the next year and a half.

“While we’re pleased that we’ve been able to get patients who are very sick into remission, and some have been in remission for more than three years, we want all of our patients to be cancer-free for life,” said Gardner. “That’s what we’re working toward.”

Erin Cross, 7, is one patient who has experienced the power of immunotherapy. Erin was diagnosed with ALL at age 2, and has spent much of her life since in and out of hospitals. Initial cancer treatments put Erin into remission, but she relapsed in 2016. After all other treatment options near her hometown of Chester, England, had been exhausted, Erin traveled to Seattle to enroll in PLAT-02 as a last hope. Now, a year later, Erin is still in remission.

“Without immunotherapy, Erin would not be here with us today,” said Antony Cross, Erin’s dad. “It gave us our little girl back.”

In seeing the promise of CAR T-cell immunotherapy, Seattle Children’s researchers are also working to develop CAR T-cell trials that will target solid tumors, including brain tumors and sarcomas.

“We believe that T-cell immunotherapy holds tremendous potential to combat leukemia and several other types of pediatric cancer,” said Gardner. “Leukemia is just the tip of the iceberg, and we hope to develop a therapy that can be given to patients as a first line of defense, greatly reducing the side effects of cancer treatment.”

If you are interested in supporting the advancement of immunotherapy and cancer research at Seattle Children's, please visit our donation page.