COVID-19 Advisory: Only one primary caregiver per patient at all of our locations. No other visitors. Call center for questions: 1-833-987-2100. More information. Español (PDF). 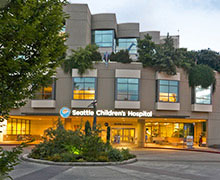 Seattle Children’s Hospital – ranked as one of the best children’s hospitals in the country by U.S. News & World Report – serves as the pediatric referral center for Washington, Alaska, Montana, and Idaho. For over 100 years, we have cared for children with illnesses and injuries. Though much has changed in pediatric medicine during the past century, we are proud that Seattle Children’s has often been at the forefront of these advances.

Seattle Children’s is dedicated to caring for our young patients, training healthcare professionals, pursuing research and clinical innovation and serving our community. To achieve our vision of being an innovative leader in pediatric health and wellness, one of our strategic plan goals is to develop the next generation of pediatric healthcare leaders.

Refer or Manage a Patient