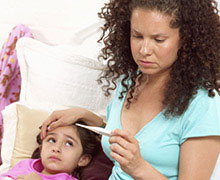 Influenza viruses cause flu. The viruses spread from person to person when infected people cough, sneeze or touch objects. Flu can be mild or severe, and can even cause death. Older people, children under 5 (especially children under 2), pregnant women and people with certain health conditions are at a higher risk for serious complications from the flu.

During the 2018–2019 flu season, 130 children died from flu and flu-associated illness. Thousands more children were hospitalized. The Centers for Disease Control and Prevention (CDC) says about 80% of the children who died had not received a flu vaccination.

Flu season usually begins in December and lasts until April in the United States. Flu vaccinations are usually available starting in September, and it's best to get the vaccine as soon as it's available. See Flu Vaccination for Current Patients and Families to learn when vaccinations are available at Seattle Children's.

We work closely with Public Health – Seattle and King County, the Washington State Department of Health and the Centers for Disease Control and Prevention(CDC) to keep you informed during flu season.

More on Flu Symptoms and Prevention

Reminder: Visitors who are sick or have been exposed to an illness should not come to the hospital.

Urgent Care Clinics in Your Neighborhood

If your child’s illness or injury is life-threatening, call 911.