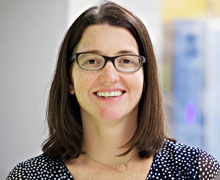 In one world, kids with cancer endure radiation, chemo and harsh side effects. In the other – a world she’s helping create – kids’ own immune systems destroy cancer with genetically modified T cells, swiftly and with minimal side effects. “Those are two very different worlds,” she says.

Gardner experienced the new, improved world at Seattle Children’s in 2013. “My very first leukemia patient went into remission after T-cell immunotherapy,” she says. “So did my second, my third and my fourth. That never gets old.”

The seeds of her immunotherapy research date back to her college years, when she spent summers researching T cells at the National Institutes of Health. She recognized then that immunotherapy offered “a very elegant approach” to curing cancer.

During medical school she had planned to become an intensivist, but her oncology rotation proved transformative. “There’s a layer of care and connection you get in oncology that you don’t get in the ER or the ICU,” she explains. “It’s a privilege to be involved with these kids and these families so intensely, at such an emotional time.”

Gardner celebrates the patients she’s seen saved by immunotherapy – including her first patient, still healthy four years after T-cell treatment. The patients she’s lost? She grieves for them – and she finds motivation to work harder, do better.

“Our pediatric cancer center is instrumental in moving immunotherapy forward,” she says. “Without philanthropy – which funds upwards of 75% of our work – we simply couldn’t do it.”

With it, though, Gardner can save lives today – and create a world of hope and health for more patients tomorrow.