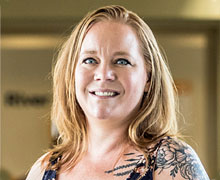 Our son Lincoln was born with a rare condition that involved severe heart defects. At just 12 hours old he had his first open-heart surgery. At 4 months it was clear his survival hinged on a heart transplant. We needed to leave the hospital where Lincoln was being treated and head to Seattle Children’s.

I didn’t want to go. I felt safe there and I trusted the medical team. I cried all the way to Seattle.

But I knew I was in the right place as soon as we arrived. Lincoln’s new medical team immediately pulled me into their circle and involved me in the decision-making. Being included was hugely comforting to me.

Being heard was even more important – and the team never failed to take my ideas into consideration.

I remember when the stress took its toll on my ability to produce breast milk for Lincoln. I questioned why the hospital didn’t allow donor milk, and the team found a way to change the policy for my son!

This same consideration also extended to Lincoln’s siblings. Once our social worker realized they had energy to burn, she secured a scholarship for them to do parkour several afternoons a week.

After three months in Seattle of anxious waiting, Lincoln received a new heart. Nearly three years later, he’s a busy, strong-willed toddler embracing his “tantrum threes.” On those days when his nap time can’t come soon enough, I’m more grateful than ever that Seattle Children’s gave a new heart to Lincoln – and new hope to our whole family.