For Cancer Warrior Michael Jensen, Immunotherapy Is a Family Tradition 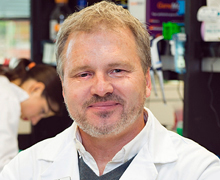 Dr. Michael Jensen’s career in immunotherapy – using the body’s own defenses to kill diseases – is rooted in his DNA: Jensen’s grandfather helped develop a diphtheria vaccine and later directed a global vaccination program.

Jensen’s own odyssey began at 16 when he bicycled to the house of a neighbor, Seattle immunotherapist Phil Greenberg, and asked for a summer lab job. Greenberg said no; Jensen showed up for work anyway.

“I spent the summer cleaning mouse cages,” he laughs, “but the next summer I was promoted to the tissue lab.” Gradually, the two became close colleagues.

Jensen developed his own spin on immunotherapy, which he brought to Seattle Children’s in 2010. By modifying disease-fighting T cells with “chimeric antigen receptors,” or CARs – which recognize and lock onto a particular structure on leukemia cells – Jensen turns T cells into guided missiles that attack cancer.

Jensen’s work isn’t finished. In half those patients, the disease recurred within a year. Now he and his team are investigating the sneaky return, and developing ways to block it. He’s also engineering CAR T cells to attack brain tumors and other forms of cancer, too.

Philanthropy is crucial to leveraging his breakthroughs. “We’ve cured a lot of mice,” he says. “To cure more kids, we need funding to expand research and clinical trials. With another $20 million, we could go from eight trials to more – lots more – against more types of cancer. It would be immediately catalytic.”