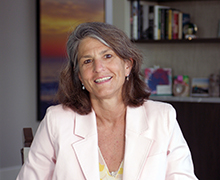 I am so proud to be part of an amazing Guild Association community dedicated to our shared mission of helping every child live the healthiest and most fulfilling life possible.

Guild members’ creativity, enthusiasm, friendship and dedication to the mission make up the “secret sauce” that allows us to meet our Guild Association goals. I am continually in awe of your noteworthy accomplishments, many of which are highlighted in our Annual Report, and inspired by guilds continuing to put the needs of our community first during challenging times. In coming together with you during our virtual United in Hope event, I was reminded again that our dollars are not abstract resources, but rather are keys that unlock doors for families navigating some of the most difficult of diagnoses. All these stories reflect that we are stronger together.

Thank you so much for all you do. I wish you all a healthy, joyful summer. 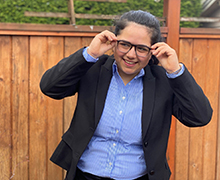 Javi Barria, a Seattle Children’s patient ambassador, was the enthusiastic emcee of the United in Hope online event.

This virtual conversation with leading experts in pediatric mental health care highlighted how Seattle Children’s is addressing today’s youth mental health crisis. The group shared about the hospital’s leadership in a once- in-a-generation transformation of the behavioral health paradigm so that all children, teens and families can live the healthiest and most fulfilling lives possible.

“Seeing Seattle Children’s shining a light on mental health and making it a main focus has meant the world to me. When I was going through my hospitalization, I felt like no one really cared that there were kids struggling in this unit. To see Seattle Children’s making this work a high priority shows me people really do care. I’m excited to be a part of this change and part of this movement.” 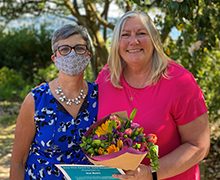 Sue Byers (right) beams after being presented with the Anna Clise award by her sister-in-law, membership committee chair Patti Byers.

Volunteer Extraordinaire
Sue Byers is a definite contender for holding more leadership positions than any guild member on record. She served on the Guild Association board from 2008 to 2017 and is currently a member of the KC Howard Guild and the Friends of Alyssa Burnett Center Guild. Sue also serves on the Seattle Children’s Government Affairs Committee and is chair of the Seattle Children’s Retail Board.

She first joined a guild because the hospital’s mission spoke to her, and that work flourished with family involvement — her mom, sister, brother and sister-in-law are all guild members. Sue’s ties strengthened as children in her family received care at Seattle Children’s: Her niece was diagnosed as hearing-impaired, a nephew had a severe nut allergy and another nephew required surgery.

“Everyone has a story, mine just kept happening a few years apart. I loved being on the board and learning about the cutting-edge work that you can’t even believe is happening,” she says, citing immunotherapy as a particular interest because of the future hope that children with cancer will not have to endure the ravages of chemotherapy and radiation.

“Receiving this award is humbling and I hope that I can continue to stay involved for many more years,” Sue says. 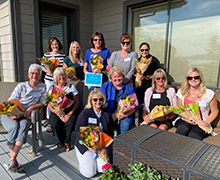 Proud members of the Jean Thompson Guild celebrate after receiving the Chairman’s Award.

Stalwart Skagit Supporters Lauded
Jean Thompson Guild president and treasurer, Colleen Fisher and Sue Christianson, respectively, are longtime friends who say volunteering for Seattle Children’s is practically in their DNA. The two women grew up in the Skagit Valley helping their moms roll coins for hospital penny drives. When they started their own families, it seemed predestined that they would form a guild to support their favorite hospital.

Launched as the Skagit Valley Guild in 1982, today the Jean Thompson Guild is 34 members strong and remains committed to uncompensated care. In total, its members have raised more than $765,000 to support hospital families in need — doing everything from slinging hot dogs at a store grand opening to hosting an Amazing Race-like road rally to raise funds. The guild’s signature event of the last decade is a themed annual dinner and auction, attracting hundreds of Skagit Valley locals. The guild held a raffle this year and will resume its dinner/auction in 2022.

“I personally have not had to take a child to the hospital, but I can’t imagine what it would be like to need medical care and not be able to afford it,” Colleen says. “It’s inspiring to know we can help people who need it, including many of our neighbors in the Skagit Valley.”

Thanks to your support, United in Hope raised more than $5,600 for mental health services at Seattle Children’s! Here is one story about how your gifts make a difference to kids and families in our region. 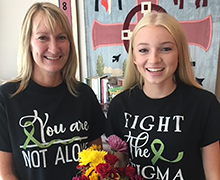 In the sixth grade, Seattle Children’s patient ambassador Reese Patterson, experienced vicious cyberbullying from peers. The problem intensified to the point that she began cutting herself and having suicidal thoughts. She was referred to Seattle Children’s Psychiatry and Behavioral Medicine Unit (PBMU) and released after a seven-day stay. However, Reese still struggled, and she attempted to take her own life by overdosing on pills. She was readmitted to the PBMU, and this second stay yielded better results.

“My perspective changed,” Reese says. “It was more productive in that I no longer wanted to feel the way I was feeling.”

Reese was also put on the waiting list for Seattle Children’s Dialectical Behavior Therapy (DBT) program. This intensive outpatient cognitive-behavioral therapy is for teens 13 to 17 who have ongoing trouble regulating emotions and lack effective coping skills. The DBT program serves those who have thoughts or plans of suicide, have made suicide attempts, or have injured themselves on purpose.

There was a waiting period of a few months, and in November 2018, Reese’s mom Val received the long-awaited call for Reese to join the program.

DBT psychologist, Dr. Nicole Stettler, helped Reese evaluate her thoughts and feelings and come up with ways to help her manage her depression and urges to hurt herself.

“Reese and I worked on what we always target first in DBT — life-threatening behavior,” Stettler said. “She was approaching the anniversary of completed suicide by a friend, and that was on her mind. We look at what was driving suicidal thoughts and self-harm behaviors and started to learn and apply DBT skills to stop the chain of events of taking actions on thoughts and urges.”

“The goal of DBT is to build a life worth living by taking suicide and self-harm off the table as options, so that we can help put other skills and behaviors in place to reach that life worth living,” Stettler says.

After a little over a year of weekly DBT sessions, Stettler saw significant changes in Reese’s behavior and knew Reese was ready to graduate from the program.

“She wrote me a letter I still have a copy of that was incredibly moving in that she shared how much DBT and the work we did together impacted her life,” Stettler says.

“The DBT program changed our lives — and saved Reese’s,” Val says. “Our family learned to communicate better, cope with small and large challenges, learned mindfulness techniques and strategies to help ourselves and others. It didn’t fix the bullying situation for Reese, but it armed her with the skills to cope with her feelings, manage her emotions, and let go of the stuff that doesn’t matter.”

Today, Reese is thriving, and she wants others struggling with mental health issues to know: “No one can change your mindset other than you. The biggest takeaway I received from my experiences is that nothing is going to change unless you’re ready to make that change.”

For the most accurate times and locations, please visit our website.